Alzheimer’s disease (AD) is a progressive neurodegenerative disorder and one of the most common causes of dementia worldwide. It is estimated that in Europe alone, the number of the dementia sufferers is about 6.4%—most of them, patients with AD (4.4%) [ 1]. Due to the aging population, the number of patients with AD is on the increase and this contributes to a wider public health problem. The results of Mendez et al. [ 2] suggest that 43% of patients with AD have complex visual complaints. These patients require a proper diagnosis and suitable treatment, and the need for earlier diagnosis to slow the progression of the disease is undisputed.
Initially, AD symptoms are discreet and generally relate to memory deficits. However, in some cases, AD can begin with visual disturbances, including problems with reading, blurred vision, and vague complaints of poor vision. Such patients may have normal routine ophthalmological examination results including normal visual acuity and normal fundus [ 3– 7]. The results of some studies suggest that in patients with AD, optic nerve degeneration, and loss of retinal cells, specifically disappearance of ganglion cells and their axons is evident [ 8– 11]. In the brain of patients with AD, the characteristic features are beta-amyloid deposits and neurotransmitter’ production disturbances, mainly decreased levels of acetylcholine. Beta-amyloid deposits were also found in the eye [ 12, 13], and acetylcholine is crucial to proper functioning of retinal cells [ 14].
Anzeige
Potential value in diagnosis of visual abnormalities in AD may be provided by electrophysiological studies of the retina and optic nerve such as pattern electroretinogram (PERG) and pattern visual evoked potential (PVEP) tests. These examinations measure the bioelectrical activity of retinal ganglion cells and the optic nerve. To date, the available results of PERG and PVEP tests in patients with AD are inconclusive. Although abnormalities in PERG and in PVEP tests have been reported in patients with AD [ 15– 21], normal PERG and PVEP tests results were also observed [ 15, 21– 25].
In some PERG examinations, amplitude reduction was evident [ 15, 16]. Parisi et al. [ 17] showed a significant increase in latencies of N35-, P50-, and N95-waves and reduction in their amplitudes. Additionally, P50-wave latency increase and amplitude reduction in P50- and N95-waves were correlated with a statistically significant reduction in nerve fiber layer thickness, as measured by Optical Coherence Tomography (OCT). In PVEP examination, a latency increase in the P100-wave was observed by Pollock et al. [ 19], Kergoat et al. [ 21], and Partanen et al. [ 18]. The described studies were performed in patients who were at different stages of AD, and most of them examined small numbers of patients. The aim of the current research is to evaluate retinal and optic nerve bioelectric function in patients only in the early stages of AD by means of PERG and PVEP tests.

Thirty patients in the early stages of AD (20 [66.7%] women and 10 [33.3%] men), aged 54–83 (mean 72.9 ± 6.8), were diagnosed in the Neurology Department of the Pomeranian Medical University in Szczecin, Poland.
Each patient with AD underwent neurologic examination including magnetic resonance imaging (MRI). All patients met the diagnostic criteria of probable AD according to the National Institute of Neurological and Communicative Disorders and Stroke and the Alzheimer’s Disease Association (NINCDS-ADRDA) [ 26]. The inclusion criteria for the early stages of AD were as follows: minimal cognitive disturbances in accordance with the neurologic tests and the Mini Mental State Examination (MMSE) [ 27] score above 21 points. Patients were diagnosed as having AD from 6 months to 2 years. The ocular inclusion criteria were as follows: taking patient’s history, visual acuity >0.8 (Snellen chart), normal intraocular pressure, normal kinetic visual field, no changes in anterior and posterior segment of the eye, and normal color vision. Patients with systemic disorders with known influence on the function of retina and optic nerve as well as with poor cooperation were excluded.
Anzeige
PERG and PVEP tests were performed in all patients (30 eyes—always left). Additionally, the measurement of retinocortical time (RCT)—a parameter described for the first time by Celesia et al. [ 28, 29]—was obtained to provide more precise information regarding neural conduction in the postretinal visual pathway. PERG and PVEP examinations were recorded with the RetiPort (Roland Consult) system, in accordance with the ISCEV PERG and PVEP standards [ 30– 33].
At the beginning of the study, 10 patients with AD had the PERG and PVEP tests performed twice in two separate sessions for checking the reproducibility of measurements. Reproducible results were obtained. Variability was determined by calculating the coefficients of variation (CV) for PERG and PVEP tests. Additionally, for each parameter, statistical comparisons of mean values and variances were performed. Student t-test and test for two variances for dependent two samples were used. There were no statistical differences between compared parameters mentioned earlier. For all measured parameters, for which the statistically significant abnormalities between patients with AD and control group were obtained, the intersessions variability did not exceed 10%—Table  1.
Table 1
Early stages of Alzheimer’s disease—analysis of the mean CV for parameters of PERG and PVEP tests ( n = 10)
n number of eyes, x arithmetic mean value, SD standard deviation, P significance level, NS not significant, I first examination, II second examination, IT implicit time, A amplitude, L latency

Preparation of the patient: pupils were undilated, appropriate refractive error correction in relation to the eye-screen distance, binocular stimulation, and monitoring with a TV camera (to stop the stimulations when frequent blinking or fixation loss) was carried out.
Parameters of the pattern stimulation were as follows: 21″ CRT monitor with a frame rate: 75 fps was used, a black and white reversing checkerboard was presented to the patient with a check size: 0.96°, luminance for the white elements: 120 cd/m 2, contrast: 97%, temporal frequency: 4.7 rev/s (2.35 Hz), and central fixation was used.
Electrodes: thread DTL electrodes were used as active and a gold disk placed at the ipsilateral outer canthi as reference, with ground—gold disk—electrode placed on the forehead (Fpz).
Parameters of the recording system were as follows: filters: 1–100 Hz, switched off notch filters, sweep time: 250 ms, artifact reject threshold: 50 μV, averaging: 200 sweeps. Two consecutive waveforms were recorded, off-line averaged, and then analyzed.
Analysis of PERG parameters: amplitude and time of the P50- and N95-waves with manual correction to the automatic cursor placement were analyzed.

Preparation of the patient: pupils were undilated, appropriate refractive error correction in relation to the eye-screen distance, monocular stimulation, monitoring with the TV camera (to stop the stimulation when frequent blinking or fixation loss) was used.
Anzeige
Parameters of the pattern stimulation were as follows: 21″ CRT monitor with a frame rate: 75 fps was used, a black and white reversing checkerboard was presented to the patient with a check size: 1°4′ and 16′, luminance for the white elements: 120 cd/m 2 (mean luminance 55 cd/m 2), contrast: 97%, temporal frequency: 2 rev/s (1 Hz), and central fixation was carried out.
Electrodes: active—gold disk electrode placed on the scalp over the visual cortex at Oz with reference—gold disk electrode placed at Fz; ground—gold disk electrode placed on the forehead at Fpz. The electrodes were placed relative to bone landmarks according to the international 10/20 system [ 34].
Parameters of the recording system were as follows: filters: 1–100 Hz, switched off notch filters, sweep time: 300 ms, artifact reject threshold: 50 μV, averaging: 100 sweeps. Two consecutive waveforms were recorded, off-line averaged and then analyzed.
Analysis of PVEP parameters: amplitude and time of the P100-wave with manual correction to the automatic cursor placement were analyzed. Furthermore, in order to evaluate the bioelectrical function of macular vs more peripheral regions of the retina, differences between amplitudes of P100-wave in patients with the early stages of AD and control subjects after simulation with the small (16′) and large (1°4′) check stimuli were measured. The same comparisons were made between latencies of the P100-wave.
Anzeige
Retinocortical times (RCTs) were also compared, that is the difference between latency of P100-wave (16′ checks—RCT 1 and 1°4′ checks—RCT 2) and implicit time of the P50-wave, following the methods described by Celesia et al. [ 28, 29].
Values of all parameters of patients with AD were compared with the values for the control group consisting of 30 eyes (always left) of 30 healthy individuals matched for age, sex, and refractive errors with AD patients.
The research was conducted in accordance with the principles of the Declaration of Helsinki, informed consent was obtained, and the protocol was approved by the local Independent Ethics Committee.
The Shapiro–Wilk test was used to evaluate compatibility with normal distribution of analyzed electrophysiological parameters. The PERG and PVEP parameters in eyes of patients with AD and eyes of the control group were compared in the following way: (1) for normally distributed data, the arithmetic mean and standard deviation was applied, and Student t-test was used (2) for abnormally distributed data, minimum–maximum value and median was used and evaluated with the Mann–Whitney U test. The results of PERG and PVEP tests were considered normal when they included between mean and ±two standard deviations (x ± 2SD) for normally distributed data or 2.5 and 97.5 percentiles for abnormally distributed data. The significance level of PERG and PVEP parameters was <0.05. For statistical calculations, the number of eyes tested was used, rather than the number of subjects.
Anzeige 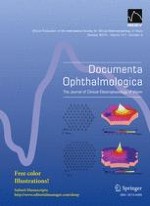 Inter-subject, inter-ocular and inter-session repeatability of the photopic negative response of the electroretinogram recorded using DTL and skin electrodes