Birds, with their broad geographic ranges and close association with humans, have historically played an important role as carriers of human disease and as reservoirs for drug-resistant bacteria. Here, we examine scientific literature over a 15-year timespan to identify reported avian-bacterial associations and factors that may impact zoonotic disease emergence by classifying traits of bird species and their bacteria. We find that the majority of wild birds studied were migratory, in temperate habitats, and in the order Passeriformes. The highest diversity of bacteria was found on birds in natural habitats. The most frequently reported bacteria were Escherichia coli, Salmonella enterica, and Campylobacter jejuni. Of the bacteria species reported, 54% have shown pathogenicity toward humans. Percentage-wise, more pathogens were found in tropical (vs. temperate) habitats and natural (vs. suburban, urban, or agricultural) habitats. Yet, only 22% were tested for antibiotic resistance, and of those tested, 75% of bacteria species were resistant to at least one antibiotic. There were no significant patterns of antibiotic resistance in migratory versus non-migratory birds, temperate versus tropical areas, or different habitats. We discuss biases in detection and representation, and suggest a need for increased sampling in non-temperate zones and in a wider range of avian species. 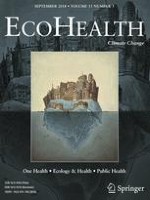 Conservation Values and Risk of Handling Bats: Implications for One Health Communication