Pediatricians in the Netherlands have been confronted with high numbers of refugee children in their daily practice. Refugee children have been recognized as an at-risk population because they may have an increased burden of physical and mental health conditions, and their caretakers may experience barriers in gaining access to the Dutch health care system. The aim of the study was to gain insight into the barriers in the health care for refugee children perceived by pediatricians by analyzing logistical problems reported through the Dutch Pediatric Surveillance Unit, an online system where pediatricians can report predefined conditions. Pediatricians reported 68 cases of barriers in health care ranging from mild to severe impact on the health outcome of refugee children, reported from November 2015 till January 2017. Frequent relocation of children between asylum seeker centers was mentioned in 28 of the reports on lack of continuity of care. Unknown medical history (21/68) and poor handoffs of medical records resulting in poor communication between health professionals (17/68) contributed to barriers to provide good medical care for refugee children, as did poor health literacy (17/68) and cultural differences (5/68).
Conclusion: Frequent relocations and the unknown medical history were reported most frequently as barriers impacting the delivery of health care to refugee children. To overcome these barriers, the Committee of International Child Health of the Dutch Society of Pediatrics recommends stopping the frequent relocations, improving medical assessment upon entry in the Netherlands, improving handoff of medical records, and improving the health literacy of refugee children and their families. 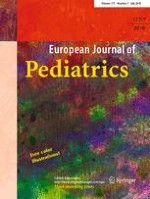 Development of minimum standards of care for juvenile localized scleroderma

Timing and documentation of key events in neonatal resuscitation