The online version of this article (https://​doi.​org/​10.​1007/​s12630-019-01533-2) contains supplementary material, which is available to authorized users.
Kate Goldstone and Carla Edgley contributed equally.

Our objectives were to analyze the gender of reviewers of all manuscripts submitted to the Canadian Journal of Anesthesia in 2016 and 2017. We hypothesized that the percentage of reviewers who were women would be ≤ 25%, an estimate based on the expert opinion estimates of the investigators and much less than the overall proportion of women in medicine.

Reviewers and authors of manuscripts submitted between 1 January 2016 and 31 December 2017 were coded as “woman”, “man”, or “unknown gender” according to an internet search of the person’s name, address, medical registration, and/or first name. We also explored associations between reviewer gender and author gender, numbers and types of manuscripts assigned, as well as speed of acceptance and completion of reviews.

Despite 36.2% of the authors being women, only 22.9% of reviewers were women and they represented only 18% of the individual written reviews gathered. Our results are consistent with previous reports of underrepresentation of women as reviewers in various disciplines. Formal policies that promote increased gender diversity should be considered. 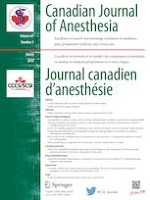 Attitudes of healthcare providers towards cardiac donation after circulatory determination of death: a Canadian nation-wide survey

Point-of-care handheld ophthalmic ultrasound in the diagnosis and evaluation of raised intracranial pressure and Terson syndrome: a description of two cases

Interventional pain management for chronic pain: a survey of physicians in Canada

Comment on “Using surgical gloves to ventilate a patient”

Acceptability of cardiac donation after circulatory determination of death: a survey of the Canadian public