We present the largest series of paediatric pelvic pyomyositis from a temperate country, analyse the factors influencing long term prognosis and suggest a diagnostic protocol.

We included 41 patients diagnosed with primary paediatric pelvic pyomyositis between 1998 and 2016, in this study with a mean age of 7.5 years. Demographic, clinical, radiological and follow-up data were reviewed. Statistical analysis was performed to analyse the influence of early diagnosis and treatment on the final outcome.

There was an increased occurrence of primary pelvic pyomyositis in the last two years. Of cases identified, 85% fulfilled Kocher’s criteria for hip septic arthritis. The mean time to diagnosis was 2.8 ± 0.8 days. The most common muscle affected was obturator internus (65.85%) and multifocal involvement was common (46.34%). Early diagnosis and antibiotic treatment within seven days from the time of onset of symptoms was the only factor that influenced final outcome (p < 0.001).

Pyomyositis is no longer restricted to tropical countries. The time from onset of symptoms to start of antibiotic treatment influences the final outcome. Clinical examination and inflammatory markers have low specificity in distinguishing between pyomyositis, septic arthritis, osteomyelitis or other infections. MRI is more sensitive and can diagnose pyomyositis in its early stages. Every suspected case of septic arthritis of the hip should undergo an ultrasound. MRI scan may be performed if the ultrasound shows inconclusive evidence of an effusion. Early identification will facilitate early antibiotic treatment which will improve the final outcome.

There is an increasing occurrence of this tropical disease in temperate countries. Early diagnosis with an MRI scan and early antibiotic use results in good outcomes. 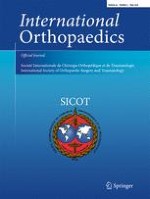