Advanced glycation end products (AGEs) have been implicated in the pathogenesis of sarcopenia. The objective of the study was to investigate the prevalence of sarcopenia in degenerative lumbar scoliosis (DLS), and the relationship between biochemical markers including major AGEs, pentosidine, and DLS in older women.

We found that sarcopenia was involved in DLS, and high serum pentosidine levels are associated with severity of coronal and sagittal malalignment in older women, suggesting that high levels of AGEs are a potential biomarker for the progression of lumbar scoliosis and kyphotic deformity. Further studies are needed to clarify the pathogenesis of DLS. 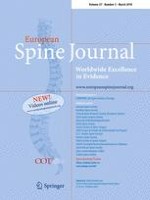 How does patient-rated outcome change over time following the surgical treatment of degenerative disorders of the thoracolumbar spine?