We linked the ‘Work Environment and Health in Denmark’ (WEHD) 2014-survey (The National Research Centre for the Working Environment 2015) with 18 months follow-up of sickness absence data from the Danish Register of Work Absence (Statistics Denmark 2016a).
Anzeige

The Danish Register of Work Absence is a combination of Statistics Denmark’s ‘absence and employment’-register (FRAN) and ‘periods of absence’-register (FRPE). It has start- and end-dates of all absence periods due to ‘own sickness’, ‘child sickness’, ‘occupational injury’ and ‘maternity and adoption leave’ from (1) all public institutions, (2) all private companies with more than 250 employees, (3) a sample of private companies with 10–250 employees (a new sample drawn every year). Private companies with less than ten employees are not included (Statistics Denmark 2016b). The register covers 100% of all public employees and about 37% of all private employees. We were able to link 17,953 of the 27,246 WEHD-responders (66%) to the ‘Register of Work Absences’, that is, 66% of the responders worked in workplaces covered by the register. We used ‘own sickness absence’ as outcome. We excluded employees who were sickness absent at baseline ( N = 158), leaving 17,795 individuals for the analyses. In the final sample 60% was women, the mean age was 47 years, and 50% had a higher education. Compared to the baseline-sample, the final sample consisted of significantly more women, had a higher mean age, and a higher education (tested by chi-square and t test). Employees were followed from response-date up to 18 months follow-up; the mean follow-up time was 15 months.
We defined the outcomes as all-length sickness absence, i.e., a sickness absence period of at least 1 day (≥ 1 day), and long-term sickness absence (≥ 31 days). Based on the Danish social security system we chose 31 days as the cut-point for long-term sickness absence, because employers are reimbursed for sickness absence periods longer than 30 days by the municipality (for all shorter periods the employer pays the employees’ sick-pay). Additionally, the outcome was defined as sickness absence periods of a minimum of 2, 4, 6, 8, 11, 15, 20, and 25 days.

Covariates from the Central Person Register (CPR), the Population Education Register (BU), and the Danish Register of Work Absence

We used Cox-regression with a frailty model for repeated events (Christensen et al. 2007), i.e., we allowed for multiple sickness absence periods for the same employee. Employees were censored when lost to follow-up (e.g., when a new sample was drawn to the register N = 1266, when employees lost or changed job N = 1843, or went on maternity leave N = 197). First, we analyzed the association between perceived stress and all sickness absence periods (≥ 1 day), followed by analyses with long-term sickness absence as outcome (≥ 31 days). Second, the association between perceived stress and sickness absence periods of a minimum of 2, 4, 6, 8, 11, 15, 20, and 25 days were examined. All analyses were conducted separately for men and women, and were performed unadjusted and adjusted for age, sector, education, and previous sickness absence. We tested for multiplicative interaction between sex and perceived stress. Using visual inspection of the cumulative hazard plots, we found the proportional hazard assumption fulfilled for all analyses, except for the analysis for men with ‘Sometimes’-stress and long-term sickness absence and consequently we did not report the results from this analysis. Finally, we performed sensitivity analyses with employees with unknown education ( N = 212) excluded.

The authors are grateful to the Surveillance group at the Danish National Research Centre for the Working Environment for valuable assistance with access to and quality assurance of data. The study was partly supported by a grant from the Danish Working Environment Research Fund (AMFF-10-2016-02).
Open AccessThis article is distributed under the terms of the Creative Commons Attribution 4.0 International License ( http://​creativecommons.​org/​licenses/​by/​4.​0/​), which permits unrestricted use, distribution, and reproduction in any medium, provided you give appropriate credit to the original author(s) and the source, provide a link to the Creative Commons license, and indicate if changes were made. 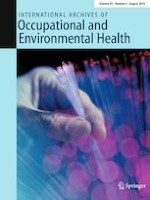 Pyrrole adducts in globin and plasma of workers exposed to hexane

Burnout symptomatology and social support at work independent of the private sphere: a population-based study of French teachers