Historical studies have shown that percutaneous drainage alone for intraabdominal abscess secondary to Crohn’s disease is successful in avoiding surgery in only approximately 50% of patients. Failure, however, can require urgent surgery and is then associated with increased morbidity, extended hospital stays, and increased risk for stoma creation. Because of this, our current protocol is initial percutaneous drainage of the abscess, 5–7 days of broad spectrum IV antibiotics with simultaneous high-dose steroids and hyperalimentation, followed by planned one stage resection with primary anastomosis. The aim of the present study was to evaluate the success of this protocol with regard to length of stay, complications associated with the protocol, and its ability to avoid stoma creation.

A retrospective chart review was performed for all Crohn’s disease patients with intraabdominal abscess who underwent the above protocol from 1992 to the present.

Nineteen patients (11 male) were identified. Sixteen underwent ileocolectomy with primary anastomosis while only three patients required an upstream diverting ileostomy in addition to resection due to incompletely drained abscesses. The mean length of hospital stay was 13.9 ± 0.6 days including 6.4 ± 0.4 postoperative days. Four patients had post-op complications that did not require surgery (two self-limited anastomotic bleeds, one wound infection, and one pelvic abscess treated with a percutaneous drain). One patient needed reoperation for a small bowel obstruction.

Crohn’s disease patients with intraabdominal abscess can safely undergo planned resection with primary anastomosis if initially treated with successful percutaneous drainage and aggressive antibiotic and steroid management. Such a protocol provides a standard of care against which nonsurgical management can be compared and judged. 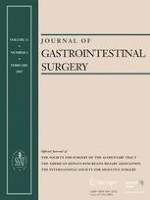 Lymph Node Dissection Impact on Staging and Survival of Extrahepatic Cholangiocarcinomas, Based on U.S. Population Data