A recently released semiconductor detector for single photon emission computed tomography (SPECT) offers several advantages over the conventional Anger-type SPECT. Instruments of both types were compared in this evaluation, in conjunction with the necessary software, to perform quantitative gated SPECT (QGS) [ 1]. The guidelines recommend a 20–30 min acquisition time for conventional systems [ 2, 3]. However, the ability of the new SPECTs to convert absorbed gamma rays directly to an electric charge allows for enhanced sensitivity and spatial resolution [ 4– 6]. Therefore, myocardial SPECT can be acquired within as little as 3–6 min [ 4]. The data acquisition method of the new SPECT scanner differs from that of conventional SPECT scanners in that it has a smaller field of view (FOV). We evaluated the spatial resolution and sensitivity (acquisition time for QGS) of a new SPECT scanner relative to a conventional instrument.

The performances of 2 SPECT scanners were evaluated and compared in this study. The first was a new SPECT scanner with a cadmium-zinc-telluride (CZT) solid-state semiconductor detector (Discovery NM 530c; D530c, GE Healthcare, Milwaukee, WI, USA). A conventional Anger-type SPECT scanner with a NaI(Tl) scintillation crystal and a dual-detector camera (Infinia; GE Healthcare) was similarly evaluated. QGS was performed using the output of both instruments using software developed at the Cedars Sinai Medical Center (Los Angeles, CA, USA) [ 1].
Anzeige
The D530c, equipped with 19 pinhole collimators, employed list-mode raw data acquisition over a 10-min interval. The three-dimensional volume (quality field-of view) for high quality imaging was contained within a sphere, approximately 19 cm in diameter [ 6]. The matrix size was 70 × 70, and the image reconstruction voxel size was 4.0 × 4.0 × 4.0 mm. The instrument was equipped with a Xeleris data processor (GE Healthcare). The phantom studies were conducted over an imaging period of 5 min. In the clinical study, QGS data were acquired over 10 min. From the 10-min projection data, 1-, 3-, 5-, 7-, and 10-min SPECT images were reconstructed.
The Infinia is a dual-detector, gamma camera system equipped with low-energy, high-resolution collimators. The matrix size for this instrument was 64 × 64, having a reconstructed pixel size of 6.8 × 6.8 × 6.8 mm. A circular rotation, with a step-and-shoot mode (30 s/projection data), was applied. Cylinder phantoms were scanned at 3° intervals over 360° using the step-and-shoot mode. The myocardial phantom was scanned at 6° intervals over 360° (20 s/step, 20 min in total). Patients were scanned with electrocardiogram (ECG)-gating at 6° intervals over 360° (40 s/step, 20 min in total) in a supine position.
In the line-source, hot-rod, and cylinder-phantom studies, the D530c data were reconstructed using maximum likelihood expectation maximization (ML-EM) with 250 iterations [ 6]. Reconstruction of the Infinia data used 50 iterations [ 7]. In the myocardial phantom study, reconstruction with the D530c was based on the implementation of a 3D iterative Bayesian reconstruction algorithm [ 8]. Reconstruction with the Infinia system used ordered subsets-EM (OS-EM) [ 7]. For the OS-EM parameter, iteration number 10 and 5 subsets were used. For all reconstructions, a Butterworth filter (order 7, cutoff frequency = 0.37 cycles/cm) [ 5] was used as a post-filter.

Full width at half maximum (FWHM) was measured using 3 99mTc line sources those were placed in a cylindrical phantom, 200 mm in diameter and 200 mm in length. The diameter of the 3 line sources was 1.0 mm and they were filled with 74 MBq 99mTc. The interval between the lines was 75 mm (Fig.  1, lower right). Data were acquired with and without water (scatter) in the cylinder. FWHM values of the line sources in the central, radial, and tangential directions were generated [ 9].
×

Phantom studies were performed using cylindrical phantoms with diameters of 80, 120, and 160 mm, each uniformly filled with 99mTc. The acquisition time was set so as to record 100 kilocounts per frame. The degree of uniformity over each cylindrical phantom was evaluated by employing profile curves along the Y-axis in the transverse plane. SPECT values of the profile curves were normalized to the maximum SPECT counts in each profile curve. The average ± 2 standard deviations of normalized SPECT values (%) were considered uniform.

Hot-rods were set in a cylindrical phantom, 140 mm in diameter. The hot-rod diameters were 5, 9, 13, 16, and 20 mm and their locations are shown in Fig.  2, upper left. The cylinder was not filled with a water background. Transverse-plane profile curves that passed through the centers of the rod cross sections were generated and evaluated.
×

Twenty patients with coronary artery disease (17 men and 3 women; mean age 66.2 ± 9.7 years; range 42–70 years) were studied. In each subject, 259 MBq of 99mTc-tetrofosmin was injected intravenously, under stress; data acquisition was initiated 20 min after injection [ 1]. SPECT images were first acquired with the D530c (for 10 min) and then with the Infinia (for 20 min). From the projection data, 1-, 3-, 5-, 7-, and 10-min D530c images were reconstructed, and the ejection fraction (EF) was calculated using the QGS software for each reconstruction time.

Before the advent of the D530c used in this study, a different type of semiconductor (CZT) detector SPECT scanner was developed as the D-SPECT [ 8]. The D-SPECT was superior to conventional SPECT scanners with an NaI(Tl) scintillation crystal in terms of its sensitivity and energy resolution. Although both the D-SPECT and the D530c scanners are equipped with semiconductor detectors, there are several differences: the solid state detector unit of D-SPECT rotates inside a small gantry, whereas that of the D530c does not rotate; the D-SPECT consists of 9 arrays of CZT detectors, whereas the D530c has 19 pinhole collimators. As well as higher sensitivity and better energy resolution, higher spatial resolution can be expected from the use of the pinhole collimators and a 3D iterative Bayesian reconstruction algorithm [ 10]. Therefore, the performance of the newly developed D530c SPECT scanner was investigated, mainly through phantom studies, and compared to results obtained using a conventional Anger type (Infinia) dual-head SPECT scanner.
In the line-source phantom study, the FWHM of the D530c was superior to that of the Infinia, indicating higher spatial resolution. Hot-rods and myocardial phantom studies also indicated better spatial resolution with the D530c. Higher spatial resolution implies higher diagnostic accuracy for myocardial ischemia [ 6], but this will need to be confirmed in future clinical studies. For other conditions, a low-dose, single-day stress–rest protocol performed using D530c has been reported to provide good sensitivity and specificity in detecting coronary artery disease [ 11].
Anzeige
In the cylindrical phantom study, counts at the center of the cylinder tended to be lower when measured by the D530c than by the Infinia. Although the influence of non-uniformity on the clinical imaging of the myocardium is unclear, this is an important finding. Non-uniformity may be derived during 180° data acquisition, and since truncation artifacts may occur in larger subjects, careful positioning of the D530c is necessary, particularly for large hearts.
The myocardial phantom study demonstrated that the counts in the inferior wall were lower than in the other walls. Optimized attenuation correction might be necessary to improve the wall uniformity and to acquire better diagnostic performance, as in the case of the Discovery NM/CT 570c [ 12]. The influence of high levels of radioactivity in the liver and gallbladder on the inferior myocardial wall was less with the D530c in this study. However, the location and volume of the high counts would be likely to affect the magnitude of this influence. There are many reports in which high activity in the liver and/or gallbladder caused imaging artifacts, i.e., lower counts in the inferior wall [ 13]. The influence of high radioactivity in the liver and gallbladder may be reduced by 180° data acquisition [ 14], but the D530c pinhole collimators located in the lower row are likely to detect the myocardium through the liver, which might cause lower counts in the inferior wall in the clinical image.
In the clinical study, EF values obtained by QGS stabilized within 5 min in the D530c study. The image quality was acceptable for the QGS software after a 3-min acquisition time in the D530c. The results of this study also confirmed that the accuracy of the EF at 5 min, or even at 3 min, was sufficient for the assessment of myocardial perfusion.

The D530c CZT semiconductor, pinhole detector SPECT scanner had a higher spatial resolution than did the conventional NaI(Tl) Anger camera. The high sensitivity of the D530c allows for a shorter acquisition time, 5 min is sufficient for QGS in the clinical setting.
Anzeige 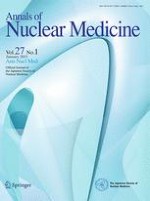 The current status of an FDG-PET cancer screening program in Japan, based on a 4-year (2006–2009) nationwide survey

Early response of patients undergoing concurrent chemoradiotherapy for cervical cancer: a comparison of PET/CT and MRI