Studies on the reliability of the MTS and its predictive power for hospitalisation and mortality in the older population have demonstrated mixed results. The objective is to evaluate the performance of the Manchester Triage System (MTS) in older patients (≥65 years) by assessing the predictive ability of the MTS for emergency department resource utilisation, emergency department length of stay (ED-LOS), hospitalisation, and in-hospital mortality rate. The secondary goal was to evaluate the performance of the MTS in older surgical versus medical patients.

A retrospective cohort study was conducted of all emergency department visits by patients ≥65 years between 01 and 09-2011 and 31-08-2012. Performance of the MTS was assessed by comparing the association of the MTS with emergency department resource utilisation, ED-LOS, hospital admission, and in-hospital mortality in older patients and the reference group (18–64 years), and by estimating the area under the receiver operating characteristics curves. 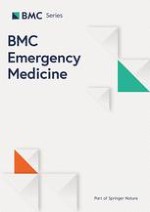 Challenges, consequences, and lessons for way–outs to emergencies at hospitals: a systematic review study

ECG alterations suggestive of hyperkalemia in normokalemic versus hyperkalemic patients

The Sydney triage to admission risk tool (START) to improve patient flow in an emergency department: a model of care implementation pilot study

Injury coding in a national trauma registry: a one-year validation audit in a level 1 trauma centre