Only a few factors may influence results of surgery to such an extent as malnutrition. It complicates wound healing, increases the rate of postoperative infections, and lengthens hospital stay. These outcomes are consequences of the destruction of immune function, amplifying the response to stress and organ dysfunction [ 1].
Nutritional therapy has been used in the postoperative period for over 100 years, since Kausch administered intravenous glucose solution to help his patient’s recovery [ 2]. However, the history of nutritional support as we know it nowadays began with the invention of parenteral nutrition by Dudrick et al. [ 3]. Intravenous admixtures proved effective not only in maintaining health status, but also in safeguarding growth. This medical approach irreversibly changed the perception of perioperative care. However, Buzby et al. [ 4] and the Veteran Affairs Trial [ 5] highlighted the consequences of hyperalimentation in well-nourished patients, indicating a reduction in complications of up to 20 %, but only in malnourished patients. These studies clarified the perspective of perioperative care and switched a proportion of nutritional intervention to the more physiological, less expensive, and safer enteral feeding [ 4, 5].
Anzeige
It took another decade to set the criteria for the selection of the proper feeding route. Nowadays, leading scientific societies, ASPEN (American Society for Parenteral and Enteral Nutrition) and ESPEN (European Society for Clinical Nutrition and Metabolism), agree that enteral nutrition should be used as the method of choice in perioperative treatment [ 6, 7]. Further studies concentrated on pharmaconutrition: formulas that can be used not only to deliver basic nutrients, but also to influence vital organs and systems to improve the outcome of therapies. One form of pharmaconutrition, aiming at improvement of immune function, was called immunomodulating or immunostimulating. These diets, both parenteral and enteral, included amino acids (arginine and glutamine), lipids (omega-3 fatty acids), micronutrients (vitamins C and E), and nucleotides. Soon after their implementation, some authors observed their encouraging influence on the outcome of surgery, which raised new hope for surgical patients [ 8– 10]. Controversy soon began, and the actual value of immunomodulating formulas for surgical and critically ill patients was examined. The positive effects of immunodiets observed in experimental models were often denied by clinical results, far more important for clinicists [ 11]. In contradiction to Braga et al. [ 8]. or Gianotti et al. [ 9], Senkal et al. [ 10]. and Lobo et al. [ 11]. revealed that enteral immunodiets bore no advantage over standard enteral nutrition (SEN) when a peptide diet was used; other authors noticed analogous results. Furthermore, most research performed in well-nourished individuals failed to demonstrate the quantifiable efficacy of immunomodulating diets [ 11– 13].
These outcomes were difficult to match because of the heterogeneity of study populations, study designs, sample quantities, and systematic approaches.
To completely address these uncertainties and to verify the value of immunonutrition in surgical patients, randomized well-designed trials were conducted in a tertiary surgical center between 2001 and 2009. Results of these trials were partially published in medical journals, but have never been presented as a summary [ 12– 15].

We conducted a randomized, not blinded (due to obvious differences in enteral and parenteral routes), controlled study in order to evaluate the impact of enteral and parenteral immunonutrition on postoperative complications in surgical patients. The study was conducted in the tertiary surgical center—the 1st Department of General and Oncology Surgery, Jagiellonian University School of Medicine, Cracow, Poland—and was performed between January 2001 and December 2009.
Anzeige
The research was planned to test the hypothesis that immunonutrition would decrease the occurrence of surgical and non-surgical complications after gastrointestinal (GI) surgery. The secondary objectives included evaluation of effects of nutritional intervention on morbidity and mortality, length of hospital stay (LOS), and vital organ function.

A total of 969 patients were initially assessed for participation in the study; 96 patients were unable to meet inclusion criteria and were excluded after initial assessment. The intent-to-treat (ITT) analysis of 776 patients (female 407, male 466, mean age 61.1 years) who underwent gastrectomy (subtotal or total resection) or pancreatoduodenectomy (subtotal or total) with lymph node excision were enrolled in the trial. The inclusion criteria included good overall status (Karnofsky >80, Eastern Cooperative Oncology Group [ECOG] grade 0 or 1); the absence of cancer dissemination or severe associated diseases (cardiac, pulmonary, renal, liver failure, chronic obstructive pulmonary disease [COPD], coronary aortic bypass graft, etc.); no history of known aversions or intolerance to analyzed substances. Patients with metastatic or unresectable cancer, who were pregnant or in poor general health (Karnofsky <80, ECOG > 1), with recent history of severe heart, lung, kidney, or liver failure, with history of allergies or drug intolerance were excluded. Malnutrition was defined as either of the following: unintentional weight loss of at least 10–15 % within 3–6 months before admission or body mass index (BMI) <18 kg/m 2. Respective groups of patients were comparable with each other in terms of sex, age, type of surgery, BMI, weight loss, serum albumin, and total lymphocyte count (TLC) on admission and blood transfusion.

Randomization and allocation of patients

After tumor resection, individuals who met the eligibility norms were intraoperatively allocated to either of four groups using sealed envelopes containing computer-generated distribution numbers. A 2 × 2 factorial scheme was used with the subsequent groups: SEN, immunomodulating enteral nutrition (IMEN), standard parenteral nutrition (SPN), and immunomodulating parenteral nutrition (IMPN) in two parts of the research. In the third part, in which enteral intervention was assessed, patients were randomized into SEN or IMEN groups. The CONSORT (Consolidated Standards of Reporting Trials) diagram (Fig.  1) shows the flow of participants through the study.
×

In contrast with well-nourished patients, who underwent surgery without preoperative nutritional support, all malnourished patients received intravenous nutrition the fortnight before surgery. Protein and energy demands were calculated using the nitrogen to body weight (b.w.) ratio (0.15 g N/kg b.w.) and the non-protein energy proportion ( Q = 150 kcal/g N). The 10 % amino acid solutions, 10–40 % glucose, and 10–20 % lipid emulsions, trace elements (Aminoplasmal, Glucose and Lipofundin MCT/LCT B and Tracutil, B Braun, Germany), vitamins (Cernevit, Baxter, USA), and electrolyte solutions were used to prepare all-in-one bags at the pharmacy. The central intravenous catheter was implanted in the subclavian or jugular vein before the onset of therapy. The tip location was confirmed by chest X-ray. The same type of intravenous admixture as given preoperatively was provided to each patient during the postoperative period up to postoperative day 7, or longer in case of complications.
The selection of parenteral instead of enteral feeding during the preoperative period, which has been endorsed for many years, was the consequence of the absence of those guidelines at the time of study preparation (2001) and the wide acceptance of that kind of perioperative approach in local surgical units (Polish national standards).
During surgery (gastric or pancreatic resection), an enteral feeding tube (Flocare Nutricia Ltd., 140 cm length) was inserted into the first intestinal loop, 15–20 cm below the nethermost anastomosis. The surgical team included at least two skilled general and oncological surgeons, and the anesthesiology team comprised four people.
Preceding surgery, BMI, weight loss, full blood count with TLC, albumin and pre-albumin concentration, liver and kidney tests were assessed.
On postoperative day 1, 3, and 8, the following assessments were made: full blood count with TLC, serum albumin and pre-albumin concentrations, liver and renal function, quantity of diet administered, and tolerance. Assessments were performed by physicians and nurses.
Anzeige
The energy and protein requirements during the postoperative period were calculated using the same method as during the preoperative intervention. Enteral feeding was started 6 h after the procedure, with 5 % glucose solution at the rate of 20 ml per h for the first 12 h, followed by infusion of Peptisorb (SEN group; Nutricia Ltd., Poland) or Reconvan ® (IMEN group; Fresenius Kabi, Poland) at the rate of 20 ml/h on day 1, 50 ml/h on day 2, 75 ml/h on day 3, and 100 ml/h thereafter. The whole intervention lasted 1 week. Diet ingredients are presented in Table  1. Infusion devices were used to administerr the diet for 20–22 h, with a 2–4 h rest period. An oligopeptide, isocaloric diet was selected as a control because of previous high tolerance in the small intestine. Infusion pumps were used to guarantee volume and speed control.
Table 1
Composition of enteral diets (per 100 ml/100 kcal)

The secondary objectives included LOS, immune system function (clinical observations and TLC), assessment of liver and renal function, and treatment compliance. Furthermore, operational time, intra-operative blood loss, blood transfusions, and the necessity for re-operation were recorded. Post-operative mortality was defined as any fatal outcome within 31 days after hospitalization. The length of postoperative stay was number of days from the date of operation until the date of discharge. Albumin solutions were not used as standard treatment.

The sample size was calculated using SamplePower™, version 16–19 (SPSS Inc., Chicago, IL, USA). A general estimation was made for each study: the total rate of complications after upper GI surgery described by previous studies was approximately 40 %. To detect a 50 % reduction triggered by immune enteral nutrition, more than 82 patients should be randomized to each of the two related arms (alpha = 0.05 two-sided, power = 0.80). We assumed a drop-out rate of 15 %; therefore, 200 patients were needed. The figures were investigated on an ITT basis using SPSS v.14 software. The differences in proportions amid groups were assessed using the Chi squared test, and Yates correction was implemented if any of the probable incidences were <5. Continuous data were studied using the Mann–Whitney U test. Differences at p < 0.05 were considered statistically significant.
Anzeige

The Ethics Committee of Jagiellonian University sanctioned the study (KBET/91/L/2004). It was not possible to obtain approval in 2001, as the Ethics Committee did not participate in such activities beforehand. Patients were registered by one of two investigators (SK, KS). Written approval was acquired from each participant before acceptance. The study was carried out following the universal ethical endorsements stated in the Helsinki Declaration and was recorded in the Clinical Trials Database (NCT00576940).

Role of sources of funding

The study was performed with no outside sponsorship.

Participants were adequately matched for age, sex, weight loss, BMI, type of operation (stomach/pancreas resection), TLC, and serum albumin (indicators of nutritional state). The number of patients who were operated on for gastric and pancreatic neoplasm, as well as patients within both groups, was comparable. The ratio of resection types (sub/total excision) did not differ between groups.
During preoperative intravenous feeding in malnourished patients, each study group received a comparable level of energy, proteins, and micronutrients.
Anzeige

None declared.
Open AccessThis article is distributed under the terms of the Creative Commons Attribution License which permits any use, distribution, and reproduction in any medium, provided the original author(s) and the source are credited. 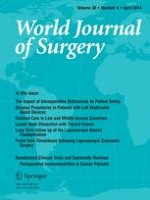 Commentary on: Characterizing the Global Burden of Surgical Disease: A Method to Estimate Inguinal Hernia Epidemiology in Ghana