In order to improve the surgical treatment of rectal cancer, robot-assisted laparoscopy has been introduced. The robot has gained widespread use; however, the scientific basis for treatment of rectal cancer is still unclear. The aim of this study was to investigate whether robot-assisted laparoscopic rectal resection cause less perioperative pain than standard laparoscopic resection measured by the numerical rating scale (NRS score) as well as morphine consumption.

Fifty-one patients were randomized to either laparoscopic or robot-assisted rectal resection at the Department of Surgery at Aarhus University Hospital in Denmark. The intra-operative analgetic consumption was recorded prospectively and registered in patient records. Likewise all postoperative medicine administration including analgesia was recorded prospectively at the hospital medical charts. All morphine analogues were converted into equivalent oral morphine by a converter. Postoperative pain where measured by numeric rating scale (NRS) every hour at the postoperative care unit and three times a day at the ward.

Opioid consumption during operation was significantly lower during robotic-assisted surgery than during laparoscopic surgery (p=0.0001). However, there were no differences in opioid consumption or NRS in the period of recovery. We found no differences in length of surgery between the two groups; however, ten patients from the laparoscopic group underwent conversion to open surgery compared to one from the robotic group (p=0.005). No significant difference between groups with respect to complications where found.

In the present study, we found that patients who underwent rectal cancer resection by robotic technique needed less analgetics during surgery than patients operated laparoscopically. We did, however, not find any difference in postoperative pain score or morphine consumption postoperatively between the robotic and laparoscopic group. 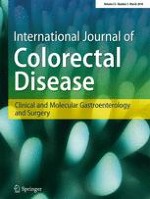 Treatment possibilities for low anterior resection syndrome: a review of the literature

Correction to: Pretreatment quality of life in patients with rectal cancer is associated with intrusive thoughts and sense of coherence