Experts are increasingly concerned by issues regarding the activity level of DNA stains. A case from our burglary-related casework pointed out the need for experiments regarding the persistence of DNA when more than one person touched a tool handle. We performed short tandem repeat (STR) analyses for three groups of tools: (1) personal and mock owned tools; (2) tools, which were first “owned” by a first user and then handled in a burglary action by a second user; and (3) tools, which were first owned by a first user and then handled in a moderate action. At least three types of tool handles were included in each of the groups. Every second user handled the tool with and without gloves. In total, 234 samples were analyzed regarding profile completeness of first and second user as well as properties like detectable major profile or mixture attributes. When second users simulated a burglary by using a tool bare handed, we could not detect the first user as major component on their handles but attribute him to the stain in 1/40 cases. When second users broke up the burglary setup using gloves, the first user matched the DNA handle profile in 37% of the cases. Moderate use of mock borrowed tools demonstrated a material-dependent persistence. In total, we observed that the outcome depends mainly on the nature of contact, the handle material, and the user-specific characteristics. This study intends to supplement present knowledge about persistence of touch DNA with a special emphasis on burglary-related cases with two consecutive users and to act as experimental data for an evaluation of the relevance of alleged hypotheses, when such is needed in a court hearing. 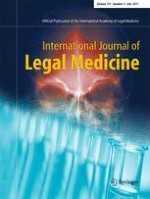 P5 medicine and justice: the future is now

Metric assessment of ancestry from the vertebrae in South Africans

Back to the Future - Part 1. The medico-legal autopsy from ancient civilization to the post-genomic era