A 68-year-old male was diagnosed with acute promyelocytic leukemia (APL). A G-banding chromosomal analysis revealed the co-existence of two clones: one with del(20q) and t(15;17)(q22;q12) and another with del(20q) alone. During the remission of APL following treatment with all-trans-retinoic acid, del(20q) was persistently identified, indicating a diagnosis of cytogenetic abnormalities of undetermined significance (CCAUS) with isolated del(20q). Bicytopenia developed 48 months after the remission of APL. The presence of isolated del(20q) was detected in the G-banding analysis, whereas morphological dysplasia of hematopoietic cells was not confirmed. This case showed indolent progression from CCAUS after the remission of APL to clonal cytopenia of undetermined significance (CCUS). CCUS with isolated del(20q) persisted for 24 months without any finding of hematological malignancies. At the most recent follow-up, targeted capture sequencing showed the U2AF1 S34F mutation. Considerable attention needs to be paid in follow-ups for CCAUS with del(20q) after the treatment of leukemia. 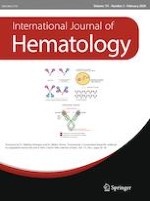 Curative potential of fludarabine, melphalan, and non-myeloablative dosage of busulfan in elderly patients with myeloid malignancy