main-content
nach oben
Zurück zum Suchergebnis
​
print
Inhaltsverzeichnis
​
insite
Ausgabenarchiv
​
archive
​
insite
Drucken
​
print
» Jetzt Zugang zum Volltext erhalten
Wichtige Hinweise
This article is part of the Topical Collection on Pediatric Neurosurgery
Comments
The authors report on a series of five patients who underwent CSF diversion for idiopathic intracranial hypertension (IIH) as children between 1984and 2000. All were boys, and all were under five years of age at shunt implantation. Three of them required multiple delayed shunt revisions,suggesting that they were permanently shunt dependent. One patient had his shunt removed for overdrainage symptoms, under intracranialpressure monitoring. Another has not required revisions for a long time, and has been assumed to be shunt independent. The authors conclude thatshunt dependency after CSF diversion for IIH is commoner than previously thought.This is an interesting study and is particularly valuable because the follow-up, ranging from 19 to 35 years, is so long. It makes a valuable contribution to the literature on IIH presenting in childhood.
Kristian Aquilina
London, UK

Long-term shunt dependency rates in children treated for IIH with CSF diversion have not been established. We therefore present our experience with 4 children shunted for Idiopathic Intracranial Hypertension (IIH) during the years 1988–2000 with very long-time follow-up. Two out of these patients have experienced late or very late episodes of severe shunt failure during the second or third decade after initial shunt treatment. They were all boys and may not be representative for IIH patients as a whole. Two of them appear, however, to be permanently shunt dependent, indicating that long-term shunt dependency in children treated for IIH with CSF diversion may be more common than previously expected. 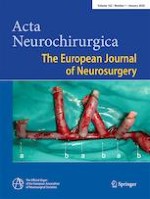 Editorial re: Facial nerve function and hearing after microsurgical removal of sporadic vestibular schwannomas in a population-based cohort by Ismail Taha et al.

Correction to: Editorial re: Facial nerve function and hearing after microsurgical removal of sporadic vestibular schwannomas in a population-based cohort by Ismail Taha et al.

How I Do it - Spine degenerative

How I do it? Interlaminar contralateral endoscopic lumbar foraminotomy assisted with the O-arm navigation

Letter to the editor - Tumor - Schwannoma

Insights into the inflammatory process of lumbar discopathy