With a multivariable prediction model the absolute treatment effect of a statin on MACE for individual elderly patients with and without vascular disease can be quantified. Because of high ARRs, treating all patients is more beneficial than prediction-based treatment for secondary prevention of MACE. For primary prevention of MACE, the prediction model can be used to identify those patients who benefit meaningfully from statin therapy. 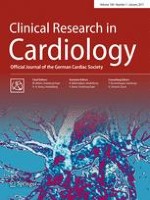 Gender-specific uncertainties in the diagnosis of acute coronary syndrome

Heart Rate reduction by IVabradine for improvement of ENDothELial function in patients with coronary artery disease: the RIVENDEL study

Safety and efficacy in ablation of premature ventricular contraction: data from the German ablation registry