Background With increasing deregulation of prescription-only medicines and drive for self-care, pharmacists have greater scope to manage more conditions. This brings added responsibility to be competent healthcare professionals who deliver high quality evidence-based patient care. Objective This study sought to establish pharmacists’ attitudes towards an evidence based approach for over-the-counter medication. Setting Pharmacists working in community pharmacies across Northern Ireland. Method Following ethical approval, a pre-piloted, self-completed questionnaire was distributed to all community pharmacies in Northern Ireland (n = 529) in September 2008. The development of the questionnaire was largely informed by the findings of a previous qualitative study. It consisted of six sections (mainly closed questions) covering factors that influence decisions regarding over-the-counter medication, recently deregulated prescription-only medicines, medications that lack evidence of effectiveness, knowledge of evidence-based practice, evidence-based practice with over-the-counter medication and demographic information. On receipt of questionnaires, responses to the closed questions were imported into SPSS® (version 17.0) for analysis which largely took the form of descriptive statistics. Chi-square and the Mann–Whitney U test were used for association between responses and demographic information with an a priori level of less than 0.05 (P < 0.05) set as significant. Main outcome measure Pharmacists’ attitudes and opinions in relation to decision making about over-the-counter medication and evidence of effectiveness were measured. Results A 39.5% (209/529) response rate was achieved. Most pharmacists [191/208 (91.8%)] ‘strongly agreed’ or ‘agreed’ that safety was the over-riding concern when dealing with over-the-counter medication. While 88.3% (181/205) ‘strongly agreed’ or ‘agreed’ that they were familiar with the concept of evidence-based practice, only 38.0% (78/205) ‘strongly agreed’ or ‘agreed’ they knew how to critically appraise research papers. Furthermore, less than a quarter [49/205 (23.9%)] appeared to be familiar with the work of the Cochrane Collaboration. Most [188/207 (90.8%)] ‘strongly agreed’ or ‘agreed’ that regardless of evidence of effectiveness, cough medicines were an important management option. Conclusion Safety was the primary concern when making decisions about over-the counter medicines. Pharmacists lacked knowledge of evidence-based practice and considered medicines which lacked evidence of effectiveness to have an important role in self-care. These factors present barriers to the widespread implementation of evidence-based practice. 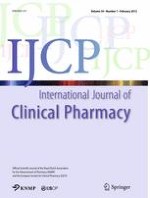 Off-label and unlicensed drug use in neonatal intensive care units in Turkey: the old-inn study