The online version of this article (doi:10.​1007/​s40262-016-0399-y) contains supplementary material, which is available to authorized users.
E. Peters, J. A. A. C. Heuberger and R. Tiessen contributed equally to this work.
J. Stevens and P. Pickkers share senior authorship of this article.

Previous clinical trials have suggested that bovine intestinal alkaline phosphatase has renal protective effects in patients with sepsis-associated acute kidney injury. We conducted a first-in-human study to investigate the pharmacokinetics, safety and tolerability of a novel human recombinant alkaline phosphatase (recAP), and we developed a population pharmacokinetic model to support dose selection for future patient studies.

In a randomized, double-blind, placebo-controlled, phase I trial, healthy volunteers received a single dose of recAP (200, 500, 1000 or 2000 U/kg; n = 33; 3:1 ratio) or multiple doses of recAP (500 or 1000 U/kg; n = 18; 2:1 ratio) via a 1-h intravenous infusion on three consecutive days. Serum recAP concentrations, alkaline phosphatase (AP) activity levels and anti-drug antibodies were measured, and safety parameters were monitored. A population pharmacokinetic model was developed, and simulations were performed to guide dose selection for a phase IIa/b trial.

Peak concentrations of recAP and peak AP activity were reached at the end of the 1-h infusion and showed a rapid decline, with about 10 % of the maximum concentration remaining at 4 h and less than 5 % remaining 24 h post-start. RecAP treatment was generally well tolerated, and anti-drug antibodies could not be detected in the serum up to 2 weeks post-injection after a single dose, or up to 3 weeks post-injection after multiple doses. A four-compartment model best described the pharmacokinetics of recAP administration, with moderate inter-individual variability on the central volume of distribution and elimination rate constant. Simulations showed that 1-h intravenous infusions of 250, 500 and 1000 U/kg recAP once every 24 h for three consecutive days constituted the dosing regimen that best met the criteria for dose selection in patient studies.

RecAP did not raise any safety concerns when administered to healthy volunteers. A population pharmacokinetic model was developed to support dose selection for patient studies. 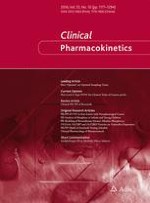 Pharmacogenetics of UGT1A4, UGT2B7 and UGT2B15 and Their Influence on Tamoxifen Disposition in Asian Breast Cancer Patients