Cefprozil, an oral second-generation semi-synthetic cephalosporin, possesses a broad spectrum of antimicrobial activity. A granule formulation has been developed to improve medication adherence of the patients. This study was conducted to assess the bioequivalence of the granule formulation to a dry suspension in healthy Chinese volunteers and estimate the pharmacokinetic (PK) profiles of cefprozil.

An open-label, randomized, single-dose, two-period, two-group, crossover study was conducted in 60 healthy Chinese volunteers under fasted or fed conditions (30 volunteers for each condition) to assess the bioequivalence between two formulations of cefprozil. Blood samples were collected at specified time intervals, and the plasma concentrations of cis- and trans-cefprozil were determined by a validated liquid chromatography-tandem mass spectrometry (LC–MS/MS) method. PK and bioavailability parameters were estimated via non-compartmental methods. Adverse events (AEs) were also recorded.

According to the criteria for bioequivalence, the test granule formulations of cefprozil and "Cefprozil for Suspension®" were determined to be bioequivalent whether under fasted or fed conditions by measurement of cis-, trans- and total cefprozil. 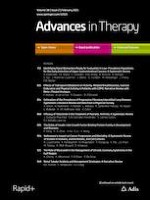 Real-World, Non-Interventional, Retrospective Study (SAMPLE) of Tolvaptan in Patients with Hyponatraemia Secondary to the Syndrome of Inappropriate Antidiuretic Hormone Secretion

Vardenafil in the Treatment of Male Erectile Dysfunction: A Systematic Review and Meta-Analysis

Identifying Novel Biomarkers Ready for Evaluation in Low-Prevalence Populations for the Early Detection of Upper Gastrointestinal Cancers: A Systematic Review

Children and Adults with PFAPA Syndrome: Similarities and Divergences in a Real-Life Clinical Setting