A total of 19 patients were administered a constant intravenous infusion of 20 mg/m2 body surface area (BSA) nedaplatin for an hour, and blood samples were collected at 1, 2, 3, 4, 6, 8, and 19 h after the administration. Plasma concentrations of unbound platinum were measured, and the actual value of platinum AUC (actual AUC) was calculated based on these data. The predicted value of platinum AUC (predicted AUC) was determined by three predictive methods reported in previous studies, consisting of Bayesian method, limited sampling strategies with plasma concentration at a single time point, and simple formula method (SFM) without measured plasma concentration. Three error indices, mean prediction error (ME, measure of bias), mean absolute error (MAE, measure of accuracy), and root mean squared prediction error (RMSE, measure of precision), were obtained from the difference between the actual and the predicted AUC, to compare the accuracy between the three predictive methods.

The AUC showed more than threefold inter-patient variation, and there was a favorable correlation between nedaplatin clearance and creatinine clearance (Ccr) (r = 0.832, P < 0.01). In three error indices, MAE and RMSE showed significant difference between the three AUC predictive methods, and the method of SFM had the most favorable results, in which %ME, %MAE, and %RMSE were 5.5, 10.7, and 15.4, respectively.

The dosage regimen of low-dose nedaplatin should be established based on Ccr rather than on BSA. Since prediction accuracy of SFM, which did not require measured plasma concentration, was most favorable among the three methods evaluated in this study, SFM could be the most practical method to predict AUC of low-dose nedaplatin in a clinical situation judging from its high accuracy in predicting AUC without measured plasma concentration. 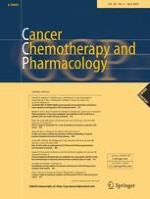 Phase I study of weekly DN-101, a new formulation of calcitriol, in patients with cancer