To provide a review of the available data on 3,4-dimethylmethcathinone (3,4-DMMC), its physicochemical properties, detection methods, patterns of abuse and prevalence, biological effects, pharmacodynamics, pharmacokinetics, metabolism, and mechanisms of toxicity have been presented and discussed.

An exhaustive literature search was carried out with PubMed, drug use forums and blogs, and sites from governmental agencies.

3,4-DMMC is a synthetic cathinone that was first detected in Europe in 2010. Its recreational use and trade in retail outlets have been prohibited in several countries, but the drug remains readily available for purchase on the Internet. 3,4-DMMC has been considered a very appealing drug to be used in combination with other abuse substances. The drug combines the features of stimulants and psychoactive phenethylamines, displays high affinity for 5-HT2 and adrenergic receptors, inhibits monoamine transporters, specially serotonin transporter, but does not promote a significant 5-HT efflux. Recently, anecdotal reports on its abuse sprang up, and 3,4-DMMC has been detected in several seized products and in blood and urine of abusers. 3,4-DMMC metabolites in the urine of habitual users showed N-demethylation, β-ketoreduction, hydroxylation, and oxidation as the major reactions involved in its biotransformation.

There is a wide scope to be explored on the effects of 3,4-DMMC. Clinicians and pathologists should be encouraged to report their findings in scientific literature, as this will aid in evaluating potential detrimental effects of the drug in further clinical and forensic investigations. Further studies on pharmacokinetic properties of 3,4-DMMC are also necessary to improve the methods of drug detection.
Anzeige 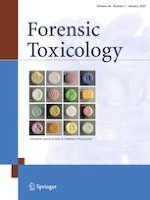 Targeting the administration of ecdysterone in doping control samples

Attempt of scopolamine-facilitated robbery: an original case of poisoning by inhalation confirmed by LC–MS/MS and review of the literature