An institutional review board-approved, multicenter clinical trial was designed to determine the efficacy and outcome of percutaneous laser ablation (PLA) in the treatment of invasive ductal breast carcinoma (IDC). Post-ablation magnetic resonance imaging (MRI) was compared with surgical pathology in evaluation of residual post-ablation IDC and ductal carcinoma in situ.

In this study, 61 patients were reported as the intention-to-treat cohort for determination of PLA efficacy. Of these 61 patients, 51 (84%) had complete tumor ablation confirmed by pathology analysis. One subject’s MRI imaging was not performed per protocol, which left 60 subjects evaluable for MRI pathology correlation. Five patients (8.3%) had residual IDC shown by both MRI and pathology. Post-ablation discordance was noted between MRI and pathology, with four patients (6.7%) false-positive and four patients (6.7%) false-negative. The negative predictive value (NPV) of MRI for all the patients was 92.2% (95% confidence interval [CI], 71.9–91.9%). Of the 47 patients (97.9%) with tumors 15 mm or smaller, 46 were completely ablated, with an MRI NPV of 97.7% (95% CI, 86.2–99.9%).

Percutaneous laser ablation is a potential alternative to surgery for treatment of early-stage IDC. Strong correlations exist between post-ablation MRI and pathologic alterations in CK8/18, ER, and Ki67 staining. 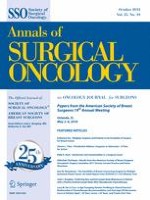 Timing and Delays in Breast Cancer Evaluation and Treatment

Treatment Outcomes for Pleomorphic Lobular Carcinoma In Situ of the Breast