Despite effective local therapy with surgery and radiotherapy (RT), ~50 % of patients with high-grade soft tissue sarcoma (STS) will relapse and die of disease. Since experimental data suggest a significant synergistic effect when antiangiogenic targeted therapies such as sorafenib are combined with RT, we chose to evaluate preoperative combined modality sorafenib and conformal RT in a phase I/II trial among patients with extremity STS amenable to treatment with curative intent. 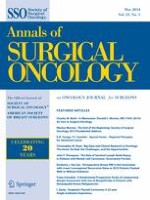 A Systematic Review of Morbidity Associated with Autologous Breast Reconstruction Before and After Exposure to Radiotherapy: Are Current Practices Ideal?

Morbidity and Mortality of Cytoreduction with Intraperitoneal Chemotherapy: Outcomes from the ACS NSQIP Database