In the 1980s, 5-fluorouracil (5-FU)/leucovorin (LV) was the standard recommended first-line therapy for unresectable metastatic colorectal cancer (mCRC) [ 1, 2]. Since then, irinotecan and oxaliplatin have been developed, and 5-FU/LV/oxaliplatin (FOLFOX) [ 3– 5] and 5-FU/LV/irinotecan (FOLFIRI) [ 6] are now recommended in the NCCN Guidelines in addition to 5-FU/LV therapy. Hurwitz et al. reported prolonged survival by combining bevacizumab with irinotecan plus bolus 5-FU (IFL) [ 7], and combinations of chemotherapy with several molecular targeting agents are now currently recommended in the NCCN Guidelines and in the guidelines from other countries. Prolonged survival as an additive effect of molecular targeting agents has been reported in first-line therapy with 5-FU/LV plus bevacizumab [ 8], and the additive effect of bevacizumab to an oxaliplatin-based regimen was demonstrated in the NO16966 study [ 9].
As described above, 5-FU/LV plus bevacizumab and FOLFOX plus bevacizumab have become established as standard, first-line therapies for unresectable mCRC. However, peripheral neuropathy and serious hematological toxicity, which are cumulative toxicities of oxaliplatin in FOLFOX, have been obstacles to continuous therapy [ 10]. To address this issue, oxaliplatin withdrawal (the stop-and-go concept) was systematically incorporated into the OPTIMOX1 study [ 11] and the OPTIMOX2 study [ 12] and was shown to be useful. Subsequently, a randomized phase III clinical study of bevacizumab combined with FOLFOX (the CONcePT trial) was conducted in order to validate the stop-and-go concept and to examine the incidence of peripheral neuropathy depending on the administration of calcium gluconate and magnesium sulfate (Ca/Mg formulation), with results reported at the American Society of Clinical Oncology Annual Meeting in 2008 [ 13]. In that study, continuous administration of oxaliplatin (continuous oxaliplatin; CO) and intermittent administration of oxaliplatin (intermittent oxaliplatin; IO) were compared using modified FOLFOX7 (mFOLFOX7; oxaliplatin 85 mg/m 2) plus bevacizumab. Median time to treatment failure (TTF), the primary endpoint, was 4.2 months in the CO arm and 5.6 months in the IO arm (HR, 0.58; P = 0.0025), demonstrating that the IO arm was significantly better. The incidence of peripheral neuropathy of grade 3 or higher, the rate of discontinuation of therapy due to peripheral neuropathy, and the need to delay the treatment and/or reduce dose were all lower in the IO arm. That report suggested the oxaliplatin stop-and-go concept to be favorable even when bevacizumab was combined with FOLFOX, but it has not been established as the standard of care, and the clinical question of reintroducing oxaliplatin remains.
Anzeige
Therefore, we conducted the phase II CRAFT (Confirmation of Avastin and intermittent mFOLFOX7 Therapy in advanced colorectal cancer) study in order to examine the efficacy and safety of a regimen of mFOLFOX7 plus bevacizumab with intermittent oxaliplatin administration for Japanese colorectal cancer patients.

Patients were entered into the study if they fulfilled the following inclusion criteria: 1) colorectal cancer was definitely diagnosed histologically; 2) the colorectal cancer was unresectable and metastatic; 3) the disease had not been treated with chemotherapy or radiation therapy; 4) at least one lesion was evaluable; 5) age 20 to 79 years; 6) the Eastern Cooperative Oncology Group (ECOG) Performance Status (PS) was 0 or 1; and 7) they had sufficient bone-marrow, liver, and kidney functions. Patients were excluded if there was 1) suspicion of brain metastasis; 2) suspicion of arterial thromboembolism; 3) chronic inflammatory disease such as rheumatoid arthritis; 4) bleeding tendencies; 5) uncontrollable peptic ulcer, hypertension, diarrhea, or infection; 6) heart disease with symptoms; or 7) pregnancy or lactation.
This study was conducted in accordance with the World Medical Association Declaration of Helsinki and the Ethical Guidelines for Clinical Studies. The scientific and ethical validity of this study was reviewed by the Ethical Review Board of each participating facility, and the study was conducted after receiving their approval. Informed consent was obtained from all enrolled patients in writing before enrollment. This study was registered with UMIN-CTR (number: UMIN000002354).
Anzeige

The protocol treatment was started within 14 days after enrollment of patients who were determined to be eligible. On day 1, bevacizumab 5 mg/kg was administered by initial 90-min intravenous infusion (which could be shortened to 60 min at the second time and to 30 min from the third time), then oxaliplatin 85 mg/m 2 and levofolinate ( l-LV) 200 mg/m 2 were administered by 120-min intravenous infusion, 5-FU 2400 mg/m 2 was administered by 46-h (days 1–2) continuous intravenous infusion, with 12 days of drug withdrawal thereafter. These 14 days constituted 1 cycle, and cycles 1–8 were conducted (block A). Thereafter, 8 cycles (cycles 9–16) were conducted without oxaliplatin (block B). Then oxaliplatin was reintroduced for 8 cycles (block C), so that a total of 24 cycles was administered as the protocol treatment (Fig.  1). Protocol treatment was continued as long as it did not conflict with the criteria for discontinuing treatment. However, the following cases were defined as the end of protocol treatment:
(1)
The 24 cycles (block A followed by block B and then block C) prescribed in the protocol had been completed. However, if progressive disease (PD) was confirmed before the completion of 8 cycles in block B, the end of protocol was defined as the end of block C following reintroduction of oxaliplatin.
(2)
The patient became operable as a result of the efficacy of treatment (with the day of surgery defined as the end of protocol treatment).
×
Computerized tomography (CT)/magnetic resonance imaging (MRI) was performed every 8 weeks during the protocol treatment, counting from the day of enrollment, in order to measure and evaluate target lesions, evaluate non-target lesions, and check for the appearance of new lesions. Image assessment by CT/MRI or other method was also permitted as necessary. If the tumor site was measured by a method other than CT/MRI, the tumor was evaluated before treatment and the same method was continued until PD. As a rule, CT/MRI was also conducted using the same measurement method and the same slice thickness as used in examination at baseline. Evaluation of tumor reduction was according to Response Evaluation Criteria in Solid Tumors (RECIST, version 1.1).
Adverse events were evaluated by the National Cancer Institute Common Terminology Criteria for Adverse Events (NCI-CTCAE v3.0) in all enrolled patients who received the protocol treatment at least once. The frequency and grade of the most serious clinical findings and laboratory test values in each cycle were tabulated. Patients were observed carefully for previously reported typical adverse drug reactions to bevacizumab and oxaliplatin, including hemorrhage, thrombosis, gastrointestinal perforation, increased blood pressure, hemotoxicity, and peripheral neuropathy.

In the NO16966 study [ 9], a phase III clinical study of FOLFOX4 or capecitabine/oxaliplatin (XELOX) with/without bevacizumab, the median PFS by on-treatment analysis excluding PD cases from at least 29 days after the final administration of the study drug was 10.4 months. In the PACCE trial [ 14], a phase III clinical study conducted to confirm the additive effect of panitumumab to FOLFOX plus bevacizumab, the median PFS for FOLFOX plus bevacizumab was 11.2 months. Therefore, the threshold PFS in this study was assumed to be 7 months considering PFS in the phase III study of FOLFOX4 [ 15], and the anticipated PFS was set at 10.5 months. Level of significance was 0.05, power was 80 %, and the required number of cases determined by using the Southwest Oncology Group’s one-arm survival design ( https://​doi.​org/​www.​swogstat.​org/​statoolsout.​html) was 42 patients. The target number of cases in this study was 50 patients, considering a dropout rate of 10 %.

The main adverse drug reactions of grade 3 or higher in the 51 patients of the safety analysis set were neutropenia 7.8 % (four patients), peripheral neuropathy 3.9 % (two patients), hypertension 3.9 % (two patients), venous thromboembolism 3.9 % (two patients), and allergic reaction 2.0 % (one patient). Grade 4 adverse drug reactions were neutropenia, decreased hemoglobin, and ileus, each 2.0 % (one patient each). In addition, gastrointestinal perforation and clinically significant hemorrhage or proteinuria of grade 3 or higher, which are characteristic of bevacizumab, were not observed (Table  2). Total allergic reactions observed were 9.8 % (5/51 patients), which led to discontinuation of protocol treatment in three cases. Discontinuation of protocol due to peripheral neuropathy occurred in one case.
Table 2
Frequency of common toxicities ( n = 51: maximum toxicity per patient)
Anzeige

We declare that we have no conflicts of interest.
Open Access This article is distributed under the terms of the Creative Commons Attribution License which permits any use, distribution, and reproduction in any medium, provided the original author(s) and the source are credited. 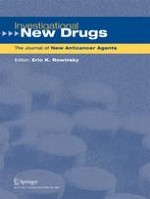 Effect of the drug transporters ABCG2, Abcg2, ABCB1 and ABCC2 on the disposition, brain accumulation and myelotoxicity of the aurora kinase B inhibitor barasertib and its more active form barasertib-hydroxy-QPA