This prospective multicenter phase II study was carried out to investigate the efficacy, safety and pharmacokinetics of S-1 monotherapy in elderly patients over 75 years of age, with unresectable advanced or recurrent gastric cancer.

Patients had measurable or evaluable lesions according to the Japanese Classification of Gastric Carcinoma. S-1 (25–60 mg determined by the body surface area and creatinine clearance) was given orally, twice daily. A course of treatment consisted of 4-week administration followed by a 2-week rest period, and the patients received repeated courses.

Thirty-three patients were enrolled. Pharmacokinetics of S-1 was studied in six patients, and the maximum plasma concentrations of respective metabolites after S-1 administration were found to be similar to those reported for younger cancer patients. The overall response rate in 33 patients was 21.2% (95% CI, 10.7–37.8%), and median progression-free survival was 3.9 months, with a median overall survival of 15.7 months. Frequently noted adverse events include leukopenia, neutropenia, anemia, anorexia, and fatigue. As for serious adverse events, relatively higher frequencies of anemia (9%) and anorexia (12%) of grade 3 severity were found, but there were no grade 4 episodes.

The results suggest that S-1 monotherapy is safe and useful for elderly patients with unresectable advanced or recurrent gastric cancer when the dose is selected with caution, taking into account renal function. 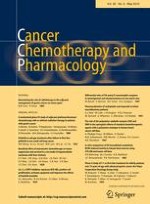 Safety and efficacy of NAD depleting cancer drugs: results of a phase I clinical trial of CHS 828 and overview of published data