Although congenital stationary night blindness (CSNB) has been described in a Japanese beagle dog research colony, certain clinical correlates with human CSNB have not yet been described, nor has an estimate of frequency of the condition been made in inbred and outbred beagle populations.

A beagle with CSNB obtained from a commercial research dog supplier in the USA and matched control dogs (n = 3) underwent examination, refraction, ocular imaging, assessment of visual navigation ability and detailed electroretinography (ERG). Retrospective review of ERGs in two independent groups of inbred (n = 15 and 537, respectively) and one group of outbred dogs (n = 36) was used to estimate CSNB frequency in these populations.

In the affected dog, there were absent dark-adapted b-waves in response to dim-light flashes, severely reduced dark-adapted b-waves in response to bright-light flashes, and normal light-adapted b-waves with a-waves that had broadened troughs. Long-flash ERGs confirmed a markedly reduced b-wave with a preserved d-wave, consistent with cone ON-bipolar cell dysfunction. There was evidence of normal rod photoreceptor a-wave dark adaptation, and rapid light adaptation. In the wider beagle populations, five inbred beagles had a b/a wave ratio of < 1 in dark-adapted bright-flash ERG, whereas no outbred beagles had ERGs consistent with CSNB.

The identified dog had clinical findings consistent with complete type CSNB, similar to that described in the Japanese colony. CSNB appears to be a rare disorder in the wider beagle population, although its detection could confound studies that use retinal function as an outcome measure in research dogs, necessitating careful baseline studies to be performed prior to experimentation. 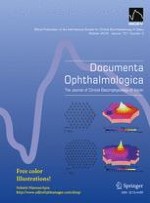