The objectives of this study were to estimate the prevalence rates of physical and mental health problems and to identify the risk factors for these complaints.

A population-based study was conducted in the Netherlands from June 2003 to April 2004 among adult refugees and asylum seekers from Afghanistan, Iran and Somalia. Asylum seekers were living in 14 randomly selected reception centres, and random samples of refugees were obtained from the population registers of three municipalities (Arnhem, Leiden and Zaanstad). A total of 178 refugees and 232 asylum seekers participated (response rates of 59 and 89%, respectively). 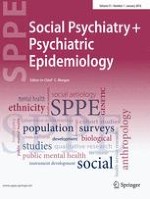 Does Expressed Emotion need to be understood within a more systemic framework?

Burnout in the general population

What does the WHOQOL-Bref measure?

Screening for mental disorders in cancer, cardiovascular and musculoskeletal diseases