The aim of the present study was to compare physiological data obtained during cycling using a noncircular "Harmonic" chainring versus a standard circular chainring over a range of speeds and slopes in endurance-trained cyclists. Thirteen male subnational cyclists (16–45 years) performed two maximal graded exercises on their own bicycle: one with a circular chainring, the other with a Harmonic chainring with the same gearwheel (52 teeth). The two chainrings were randomly assigned to avoid learning effects. The tests were carried out on a simulator. Speeds and/or slopes were increased every 2 min 30 s until exhaustion of the subject. Ventilation, oxygen uptake, carbon dioxide output, respiratory exchange ratio, and heart rate were continuously measured during the tests. Blood lactate concentration was measured during the last 30 s of each level. No significant difference was observed in any of the submaximal parameters measured during the tests (P>0.05). Similarly, maximal values were not statistically different (P>0.05). In conclusion, although the design of the Harmonic chainring was based on optimization analysis, comparison of the physiological response in this study did not translate into an advantage of the Harmonic over circular chainring during submaximal and maximal pedaling in trained cyclists. 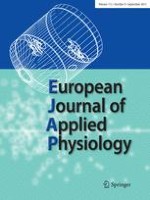 Hypercapnic impairment of neuromuscular function is related to afferent depression