PBPK models for acetaminophen and its metabolites were developed in non-pregnant and pregnant women. Physiological and enzymatic changes in pregnant women expected to impact acetaminophen pharmacokinetics were considered. Models were evaluated using goodness-of-fit plots and by comparing predicted pharmacokinetic profiles with in vivo pharmacokinetic data. Predictions were performed to illustrate the average concentration at steady state (Css,avg) values, used as an indicator for efficacy, of acetaminophen achieved following administration of 1000 mg every 6 h. Furthermore, as a measurement of potential hepatotoxicity, the molar dose fraction of acetaminophen converted to N-acetyl-p-benzoquinone imine (NAPQI) was estimated.

Acetaminophen exposure is lower in pregnant than in non-pregnant women, and is related to pregnancy duration. Despite these findings, higher dose adjustments cannot be advised yet as it is unknown whether pregnancy affects the toxicodynamics of NAPQI. Information on glutathione abundance during pregnancy and NAPQI in vivo data are required to further refine the presented model. 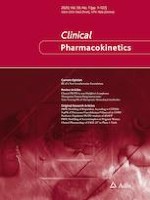 Why Were More Than 200 Subjects Required to Demonstrate the Bioequivalence of a New Formulation of Levothyroxine with an Old One?

An Integrated Paediatric Population PK/PD Analysis of dDAVP: How do PK Differences Translate to Clinical Outcomes?