Purpose The feasibility of a 3-week combination of S-1 and cisplatin as an adjuvant chemotherapy for patients with curatively resected gastric cancer was investigated. Experimental design Korean patients with stage II-IV (M0) gastric adenocarcinoma who underwent a gastrectomy with D2 lymph node resection were enrolled. The S-1 was administered orally at 80 mg/m2 divided into two daily doses for 14 days, while the cisplatin was administered at 60 mg/m2 intravenously over 2 h every 21 days. The patients received a maximum of six cycles. Results From January 2006 to July 2010, 74 patients were included in this study. The median patient age was 56 years (range, 22–71), and 51.4% (38/74) of the patients had a performance status of 0. The median number of chemotherapy cycles administered was 6 (range, 1–6). The median relative dose intensity was 86.4% for S-1 and 80.0% for cisplatin. With a median follow-up duration of 13.9 months, the median relapse-free survival (RFS) and overall survival (OS) have not yet been reached. Fifteen relapses (20.3%) were documented. Plus, the estimated RFS rate was 60.5% at 3 years. The treatments were generally well tolerated. The most frequently observed grade 3–4 hematological toxicity was neutropenia (35.1%), and only 1 cycle of neutropenic fever occurred. The most frequently observed grade 3–4 non-hematological toxicities were nausea (4.1%) and asthenia (4.1%), and all the other grade 3–4 non-hematological toxicities were observed in less than 3% of the patients. Conclusions Postoperative adjuvant S-1 plus cisplatin for 18 weeks was found to be feasible for patients with stage II-IV (M0) gastric adenocarcinoma following complete surgical resection. 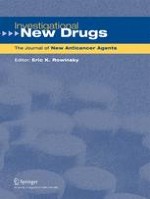 A phase 2 study of oral MKC-1, an inhibitor of importin-β, tubulin, and the mTOR pathway in patients with unresectable or metastatic pancreatic cancer