There is often a mismatch for bilateral cochlear implant (CI) users between the electrodes in the two ears that receive the same frequency allocation and the electrodes that, when stimulated, yield the same pitch. Studies with CI users who have extreme mismatches between the two ears show that adaptation occurs in terms of pitch matching, reducing the difference between which electrodes receive the same frequency allocation and which ones produce the same pitch. The considerable adaptation that occurs for these extreme cases suggests that adaptation should be sufficient to overcome the relatively minor mismatches seen with typical bilateral CI users. However, even those with many years of bilateral CI use continue to demonstrate a mismatch. This may indicate that adaptation only occurs when there are large mismatches. Alternatively, it may indicate that adaptation occurs regardless of the magnitude of the mismatch, but that adaptation is proportional to the magnitude of the mismatch, and thus never fully counters the original mismatch. To investigate this, six bilateral CI users with initial pitch-matching mismatches of less than 3 mm completed a pitch-matching task near the time of activation, 6 months after activation, and 1 year after activation. Despite relatively small initial mismatches, the results indicated that adaptation still occurred. 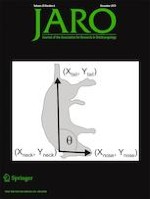 A Physiologically Inspired Model for Solving the Cocktail Party Problem

Sound Localization in Preweanling Mice Was More Severely Affected by Deleting the Kcna1 Gene Compared to Deleting Kcna2, and a Curious Inverted-U Course of Development That Appeared to Exceed Adult Performance Was Observed in All Groups