Wegener’s granulomatosis (WG) is an anti-neutrophil cytoplasmic antibody (ANCA)-associated systemic vasculitis of small and medium-sized vessels. Pituitary involvement in WG is rare with only 22 previous case reports in the English medical literature between 1966 and 2006. Herein we report another patient with WG-related diabetes insipidus (DI) and partial disruption of the anterior pituitary axes. We also review the clinical features, imaging findings, treatment and outcome of WG-related pituitary involvement. Isolated pituitary involvement in the absence of lung or renal complications in WG is rare and described in only one previous patient. Pituitary involvement in WG is usually associated with other organ involvement (96% of cases)—commonly upper respiratory tract (93%), lungs (73%) and kidneys (67%). Abnormalities are often seen in the hypothalamo-pituitary region on magnetic resonance imaging (MRI) or computed tomography (CT) of the head (90% of cases). In 65% of reported cases, cyclophosphamide-based induction therapy was used with a subsequent relapse rate of 27%, occurring at a median of 10.5 months (range: 7–36 months) after initiation of treatment. In comparison, induction treatment without cyclophosphamide was associated with relapse in 50% at a median of 4.5 months (range: 4–18 months after starting treatment) suggesting more frequent and earlier relapse. Therefore, we recommend treatment with cyclophosphamide-based regimen. Despite treatment of WG, only 17% (4 patients) had full recovery in their pituitary function. The long-term prognosis of patients with WG and pituitary involvement is not known. 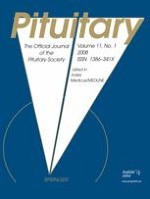 An unusual association of a sellar gangliocytoma with a prolactinoma