Paracetamol overdoses cause severe liver damage; therefore, the German Drug Prescription Act was revised in 2009 to limit the over the counter availability of paracetamol in pharmacies to 10 g per pack without a medical prescription.

Data from two sources in northern Germany concerning paracetamol poisoning were evaluated. Special attention was paid to the change of prescription regulations and possible effects on paracetamol cases.

Data from the Department of Legal Medicine Hamburg (from 2007–2017) and the GIZ Nord Poison Center (from 2008–2017) were analyzed with respect to the development of case numbers over the time periods in question, poisoning severity, measured serum concentrations, patients’ medical history and factors, such as age, gender and cause of poisoning.

No overall reduction in the number of paracetamol poisoning cases was noted in the Department of Legal Medicine Hamburg, even after the legislation change in 2009. The number of inquiries at the GIZ Nord Poison Center declined mostly for minor poisoning by 24% from 2010 to 2014. Severe poisoning remained nearly unchanged. Half of the patients in both collectives were younger than 21 years old. In adolescents and adult patients approximately 75% stated having overdosed on purpose. Young patients ingested the drug while unsupervised or were given wrong dosages by caregivers. Due to the short half-life of paracetamol, the analytical detection of paracetamol can be negative if blood is taken more than 15–18 h after ingestion.

The results show that paracetamol poisoning is still a major issue and the legislation changes did not have a relevant impact. It is necessary to further evaluate the possibility of stricter laws concerning availability of paracetamol. 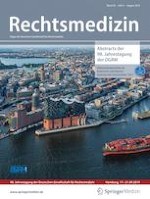