Data on four IL10 SNPs were available from 135 full-term infants, hospitalized for bronchiolitis at age less than 6 months, and from 378 to 400 controls. Viral etiology was studied, and oxygen support, feeding support and the length of stay in hospital were recorded during bronchiolitis hospitalization. 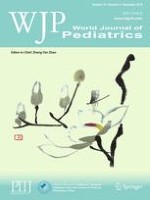 Antibiotic use in children with Kawasaki disease

Characteristics and outcome of impacted button batteries among young children less than 7 years of age in China: a retrospective analysis of 116 cases

Advances in diagnosis of chronic liver diseases in pediatric patients