Polymorphisms of the TGF-β1 gene and the risk of acquired aplastic anemia in a Chinese population | springermedizin.de Skip to main content
TOOLBAR 1 2 3 4
SUCHE MENÜ 1 2 3 4

Acquired aplastic anemia (AA) is a hematological disease characterized by failure of bone marrow hematopoiesis resulting in pancytopenia. While immune-mediated destruction of hematopoietic stem/progenitor cells (HSPCs) plays a central role in the pathophysiology of acquired AA, the transforming growth factor-β1 (TGF-β1) is crucial in adjusting the immune system. The aim of our study was to investigate the role of TGF-β1 gene polymorphisms rs1800469 and rs2317130 in susceptibility to acquired AA. Via the approach of SNaPshot, we genotyped rs1800469 and rs2317130 in 101 patients with acquired AA and 165 controls. It derived us to the conclusion that the genotype TT of rs1800469 (C/T) was significantly associated with decreased risk of acquired AA (adjusted OR = 0.39, 95% CI = 0.18–0.83, P = 0.014). Furthermore, this decreased risk was more pronounced among male patients (adjusted OR = 0.35, 95% CI = 0.13–0.95, P = 0.038) and SAA/vSAA (severe AA/very severe AA) patients (adjusted OR = 0.31, 95% CI = 0.12–0.77, P = 0.02) compared with controls in subgroup analysis. However, a significant increased risk was observed in the genotype distributions of rs2317130 for TT genotype (adjusted OR = 2.52, 95% CI = 1.03–6.19, P = 0.04) compared with the CC genotype among the SAA/vSAA patients and controls in the severity stratification analysis. Our results indicated that TGF-β1 gene polymorphisms might be involved in the munity of acquired AA in a Chinese population. This initial analysis provides valuable clues for further study of TGF-β1 pathway genes in acquired AA. 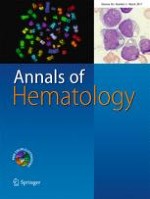 Acute promyelocytic leukaemia is highly frequent among acute myeloid leukaemias in Brazil: a hospital-based cancer registry study from 2001 to 2012

Rivaroxaban for heparin-induced thrombocytopenia: adding to the evidence