Acetabular cup position after total hip arthroplasty is correlated with the risk of dislocation, wear and range of motion [ 1– 6]. Lewinnek et al. [ 7] described a safe range (5–25° anteversion and 30–50° abduction) to position the cup. Within this range the dislocation rate was 1.5% and outside this range 6.1%. Although the position of the cup is important for the prognosis and function of the hip, most surgeons place the cup without any specific guidance devices. During surgery the surgeon estimates the position of the acetabular component and decides if it meets the desired orientation before securing it.
In this study the accuracy of the surgeons peroperative estimation of the position of the cup is evaluated.
Anzeige

All patients undergoing primary total hip arthroplasty were enrolled in the study. Patient characteristics as name, sex, age, operated side and the body mass index were recorded. All cooperating surgeons (three orthopaedic surgeons and nine residents) received a list on which the following data concerning the operation were recorded: fixation (cemented or uncemented), cup model, surgical approach, complications and the peroperative estimated anteversion and abduction of the acetabular component.
Two days after the operation two standardised X-rays were made. One anteroposterior X-ray was taken with the beam centered over the hip, the second was a plain AP radiograph centred on the symphisis, showing both hips. Radiographic cup anteversion was measured on the first radiograph, according to Pradhan [ 8], and cup abduction was assessed on the second by measuring the angle between the teardrop line and the line bisecting the opening of the acetabular cup. The combination of both radiographs was used to determine if a cup was in the ante- or retroverted position, as described by Flabeck et al. [ 9].
For both anteversion and abduction, the inaccuracy of estimation was determined by calculating the difference between peroperative estimation and postoperative X-ray measurements. Mean values and standard deviations were calculated for measured cup position, estimated cup position and inaccuracy of estimation. A comparison of these values was assessed between orthopaedic surgeons and residents, using student’s t test ( P < 0.05 assumed as significant) and a multivariate linear regression analysis was applied on the data in order to investigate which factors influenced the inaccuracy of estimation. 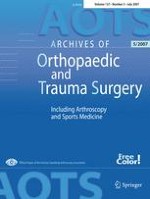 Lateral approach for fixation of the fractures of the distal tibia. Outcome of 20 patients