The unit data from the 68th round of the consumption expenditure schedule of the National Sample Survey (NSS), which covered 101,662 households, is used in the analyses. Descriptive statistics, regression analyses and the Blinder-Oaxaca decomposition methods are used.

Affordable health services should be made available to the poor and needy to reduce the health inequalities of the population. 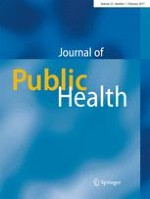 Association of alcohol use with problematic mobile phone use and depressive symptoms among college students in Anhui, China

The association of resting heart rate and mortality by gender in a rural adult Chinese population: a cohort study with a 6-year follow-up

Health, well-being and quality of life of community members displaced after an industrial disaster in Trinidad