The practical use of histological factors such as submucosal (SM) invasion depth, poor differentiation, presence of lymphovascular invasion (LVI) and tumour budding to establish the risk of nodal dissemination in pT1 colorectal cancer (CRC) is limited by their low standardization and high inter-observer variability. It was recently suggested that the presence in CRC histological sections of poorly differentiated clusters (PDCs), defined as ≥5 cancer cells with no gland formation, may predict the metastatic potential of CRC. In addition, PDC assessment was shown to be more reproducible than the evaluation of the other aforementioned histological predictors. Hence, in this study, we investigated and compared the predictive value of PDC and other histological parameters on the risk of nodal involvement in pT1 CRC. The presence of PDC, SM invasion depth ≥1,000 μm and LVI was significantly associated with N+ status in pT1 CRC (P < 0.0001). Among these parameters, SM invasion depth had the highest sensitivity to identify N+ pT1 CRC but with the lowest specificity. When the analysis was restricted to CRCs with SM invasion depth ≥1,000 μm, the presence of PDC was the only independent risk factor for nodal metastases and allowed the identification of 87.5 % of N+ cancers. In conclusion, in this study, we demonstrate that the presence of PDC is associated with the metastatic potential of pT1 CRC. The combination of this parameter with SM invasion depth may allow identifying most of the pT1 CRC with nodal metastases. 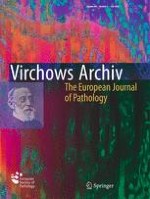