Popliteal vein aneurysm is a rare but potentially problematic disease with a risk of pulmonary embolism.

A systematic literature search was performed.

A total of 105 popliteal vein aneurysms were identified, with a slight female and left-sided preponderance. Dominating symptoms are caused by pulmonary embolism, followed by local symptoms with a palpable mass. In four patients arterial symptoms were reported. The most frequently used diagnostic test was phlebography, increasingly replaced by duplex ultrasonography in recent years. Because pulmonary embolism is a potential, it motivates surgical removal. In most cases excision and lateral suture is possible. Four fatal cases were reported. Unfortunately follow-up time and results are poorly documented.

Popliteal venous aneurysm is rare but should be considered as a local source of pulmonary embolism when no other explanation is found.
Anzeige 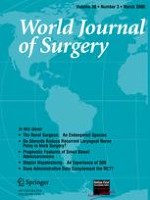 Stapler Hepatectomy is a Safe Dissection Technique: Analysis of 300 Patients

Interval Appendectomy after Conservative Treatment of an Appendiceal Mass