Berzosertib (formerly M6620) is the first-in-class inhibitor of ataxia–telangiectasia and Rad3-related protein, a key component of the DNA damage response, and being developed in combination with chemotherapy for the treatment of patients with advanced cancers. The objectives of this analysis were to characterize the pharmacokinetics (PK) of berzosertib across multiple studies and parts, estimate inter-individual variability, and identify covariates that could explain such variability.

A population PK analysis was performed using the combined dataset from two phase I clinical studies (NCT02157792, EudraCT 2013-005100-34) in patients with advanced cancers receiving an intravenous infusion of berzosertib alone or in combination with chemotherapy. The analysis included data from 240 patients across 11 dose levels (18–480 mg/m2). Plasma concentration data were modeled with a non-linear mixed-effect approach and clinical covariates were evaluated.

PK data were best described by a two-compartment linear model. For a typical patient, the estimated clearance (CL) and intercompartmental CL were 65 L/h and 295 L/h, respectively, with central and peripheral volumes estimated to be 118 L and 1030 L, respectively. Several intrinsic factors were found to influence berzosertib PK, but none were considered clinically meaningful due to a very limited effect. Model simulations indicated that concentrations of berzosertib exceeded p-Chk1 (proximal pharmacodynamic biomarker) IC50 at recommended phase II doses in combination with carboplatin, cisplatin, and gemcitabine.

There was no evidence of a clinically significant PK interaction between berzosertib and evaluated chemo-combinations. The covariate analysis did not highlight any need for dosing adjustments in the population studied to date. 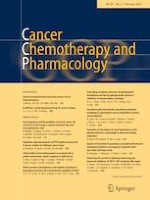