Although human T-cell leukemia virus type 1 (HTLV-1), which is the earliest recognized human retrovirus, has been shown to induce adult T-cell leukemia/lymphoma [ 1], myelopathy/tropical spastic paraparesis, sensorimotor polyneuropathy, and optic neuritis [ 2], the majority of carriers remain asymptomatic throughout their lives [ 3– 5]. However, asymptomatic HTLV-1 infection has been found to be positively associated with advanced periodontitis [ 6, 7], which is reported to be positively associated with atherosclerosis [ 8], platelet count, and inflammation [ 9]. Since HTLV-1 possesses a characteristic of enhancing inflammation [ 10, 11] possibly by activating the NF-κB pathway [ 12], its biochemical characteristics might have an influence on endothelial maintenance, including hypertension and atherosclerosis progression.
Single nucleotide polymorphisms (SNPs) in breast cancer suppressor BRCA1 -associated protein (BRAP) activate an inflammatory cascade via the activation of the NF-κB pathway [ 13] and increase the risk of carotid atherosclerosis [ 14], while reducing the risk of hypertension [ 15, 16]. A minor allele of BRAP-related SNP (rs3782886) has been found to be positively associated with platelet count and inversely associated with hypertension [ 17, 18].
Anzeige
Therefore, HTLV-1 infection possesses common biochemical characteristics that promote the NF-κB pathway [ 12] with BRAP-related SNPs. Since activation of the NF-κB pathway promotes the production of platelet activation proteins [ 19], HTLV-1 infection could be inversely associated with hypertension by activating platelet production, resulting in the progression of atherosclerosis.
To evaluate this relationship, we conducted a cross-sectional study of 2989 elderly Japanese individuals (aged 60–99 years) who had previously participated in an annual health check-up between 2016 and 2018.

Considering the shortage of staff to conduct a health check-up in the present survey, the entire city population could not be surveyed in a span of 1 year. Therefore, we conducted the survey in different parts of Goto city over a period of 3 years to ensure that all the areas were covered.
The study population was comprised of 3013 individuals (1166 men and 1847 women) aged between 60 and 99 years from Goto City (western Japan) who had previously attended an annual health check-up conducted by the local government and directed by the Ministry of Health, Labor and Welfare in Japan during 2016–2018.
Anzeige
Participants without data on HTLV-1 ( n = 14) or laboratory data ( n = 10) were excluded. The remaining participants, comprised of 2989 elderly Japanese individuals (1152 men and 1837 women) with a mean age of 73.0 (standard deviation [SD], 7.4) for men and 73.0 (SD, 7.3) for women, were enrolled in the study.
Written consent forms were made available to ensure that the participants understood the objective of the study. Informed consent was obtained from all the participants. This study was approved by the Ethics Committee of Nagasaki University Graduate School of Biomedical Sciences (project registration no. 14051404).

The experimental protocols were reviewed by the medical staff in meetings before conducting the study to reduce inter-observer variability in the measurements.
Trained interviewers were tasked with obtaining the medical history of the participants and their habitual status (drinking and smoking). Body weight and height with bare feet and light clothes were measured using an automatic body composition analyzer (BF-220; Tanita, Tokyo, Japan). Body mass index (BMI) was calculated as weight (kg)/height (m) 2.
After at least 5 min of rest, blood pressure (systolic and diastolic) was measured in the sitting position using a blood pressure measuring device (HEM-907; Omron, Kyoto, Japan). If the participants exhibited high levels of blood pressure at first (SBP ≥ 140 mmHg and/or DBP ≥ 90 mmHg), we also measured blood pressure again (second time), and then, the lower blood pressure values were used. Hypertension was defined as SBP ≥ 140 mmHg and/or DBP ≥ 90 mmHg and/or taking anti-hypertensive medication.
Blood samples were collected in a siliconized tube, a sodium fluoride tube, and an EDTA-2K tube. All measurements were obtained following the standard laboratory procedures at SRL, Inc. (Tokyo, Japan). The blood samples in the siliconized tube were used to measure high-density lipoprotein (HDL)-cholesterol and triglycerides and γ-glutamyltransferase (γ-GTP). The samples in the sodium fluoride tube were used to measure the levels of glycated hemoglobin (HbA1c). The quantities of white blood cells and platelets were determined using the blood in the EDTA-2K tube.

Experienced vascular technicians measured carotid intima-media thickness (CIMT) using a LOGIQ Book XP with a 10-MHz transducer (GE Healthcare, Milwaukee, WI, USA). The maximum values for the left and right common carotid arteries of the CIMT were calculated using an automated digital edge-detection software (Intimascope; MediaCross, Tokyo, Japan) according to a previously described protocol [ 20]. The higher values of the right and left CIMT, not including plaque measurements, were then calculated. The maximum CIMT value was used for analysis. Since a previous study reported a normal CIMT value as < 1.1 mm [ 21], we defined atherosclerosis as a CIMT value of ≥ 1.1 mm.

The characteristics of the study population are shown in Table 1. The proportion of males with HTLV infection was lower than that of non-infected individuals. However, when compared with non-HTLV-1-infected subjects, the HTLV-1-infected subjects exhibited low prevalence in current drinkers and low values of diastolic blood pressure and γ-GTP, but high values in terms of age.
Table 1
Characteristics of the study population based on status of HTLV-1 infection
Values, mean ± standard deviation. Regression models for mean values were used for determining the p-values
HDL high-density lipoprotein
*1Values are median [first quartile and third quartile]
*2Logarithmic transformation was used for evaluating p
Anzeige

Association between HTLV-1 and hypertension

Association between platelet and hypertension by HTLV-1 infection status

Association between HTLV-1 and hypertension by platelet levels

Table 6 shows the association between HTLV-1 and atherosclerosis by platelet levels among the non-hypertensive subjects. Although no significant associations between HTLV-1 and hypertension were observed for subjects with a low platelet level (≤ second tertile level of platelet), a significant positive association was observed for subjects with the highest platelet level (the highest tertile levels of platelets).
Table 6
Odds ratios (ORs) and 95% confidence intervals (CIs) for atherosclerosis in relation to status of HTLV-1 infection by platelet levels among non-hypertension
Model 1 adjusted only for sex and age, Model 2 adjusted further for sex and age, body mass index, triglycerides, HDL-cholesterol, HbA1C, white blood cell, and γ-GTP. Platelet level: Lower (T1 × T2) is < 23.4 × 10 4/μL for men and < 24.9 × 10 4/μL for women. The highest (T3) is ≥ 23.4 × 10 4/μL for men and ≥ 24.9 × 10 4/μL for women
We also found that the interaction of two platelet categories (low and the highest) had a significant effect on the association between HTLV-1 and atherosclerosis.
For sensitivity analysis, we again performed the main analyses using the definition of controlled hypertension and obtained the same associations. We also re-performed the main analyses using drinking status (non-drinker, former drinker, and current drinker) and smoking status (non-smoker, former smoker, and current smoker) as adjusting factors instead of adjusting for γ-GTP and white blood cell counts; importantly, we obtained essentially the same associations.

We are grateful to the staff of Goto City Office for their outstanding support.

This study was approved by the Ethics Committee of Nagasaki University Graduate School of Biomedical Sciences (project registration number 14051404). All procedures involving human participants were performed in accordance with the ethical standards of the institutional research committee and with the 1964 Helsinki Declaration and its later amendments for comparable ethical standards.

The authors declare that they have no conflict of interest.
Open AccessThis article is licensed under a Creative Commons Attribution 4.0 International License, which permits use, sharing, adaptation, distribution and reproduction in any medium or format, as long as you give appropriate credit to the original author(s) and the source, provide a link to the Creative Commons licence, and indicate if changes were made. The images or other third party material in this article are included in the article's Creative Commons licence, unless indicated otherwise in a credit line to the material. If material is not included in the article's Creative Commons licence and your intended use is not permitted by statutory regulation or exceeds the permitted use, you will need to obtain permission directly from the copyright holder. To view a copy of this licence, visit http://​creativecommons.​org/​licenses/​by/​4.​0/​. The Creative Commons Public Domain Dedication waiver ( http://​creativecommons.​org/​publicdomain/​zero/​1.​0/​) applies to the data made available in this article, unless otherwise stated in a credit line to the data. 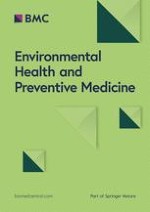 Examining geographical disparities in the incubation period of the COVID-19 infected cases in Shenzhen and Hefei, China

Changes in health status, workload, and lifestyle after starting the COVID-19 pandemic: a web-based survey of Japanese men and women