Post-irradiation angiosarcoma of the breast: clinical presentation and outcome in a series of six cases | springermedizin.de Skip to main content
TOOLBAR 1 2 3 4
SUCHE MENÜ 1 2 3 4

Angiosarcoma of the breast represents 1 % of all soft tissue breast tumors. With breast-conserving therapy (BCT) as standard in the last three decades, a new type of angiosarcoma has been reported: post-irradiation angiosarcoma (PIAS). A recent study based on the SEER database found an absolute risk for PIAS of seven per 100,000 person-years for BCT patients. We present a retrospective analysis of the clinical characteristics, treatment, and outcome of six cases of PIAS treated in our institution from 1995 to 2010. Mean age at diagnosis of breast cancer was 68 years (range 54–76 years). All patients underwent BCT. Adjuvant radiotherapy was given to all patients at doses of 45–50 Gy. Mean time from adjuvant radiotherapy to PIAS was 9.2 years (range 5.3–13.8 years); median follow-up from diagnosis of PIAS was 41.8 months (range 11–102 months). At diagnosis of PIAS, mean age of patients was 78 years (range 63–87 years). All patients underwent simple mastectomy, following which one patient received chemotherapy with doxorubicin and three patients received radiation therapy. Two patients developed local recurrence, one concurrent with metastatic disease. Another patient was diagnosed after 24 months with extensive small cell lung cancer and died of disease without recurrence of PIAS. Four patients are alive without evidence of recurrence. PIAS is a very rare sarcoma occurring after BCT. Careful observation after adjuvant radiotherapy is required. Standard treatment is the surgery with simple mastectomy and adjuvant radiotherapy; chemotherapy may be considered for more advanced cases. 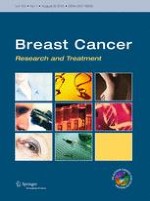 Reduction of global 5-hydroxymethylcytosine is a poor prognostic factor in breast cancer patients, especially for an ER/PR-negative subtype