Background Since the approval of sorafenib, no other agent has been proven to show survival benefits in clinical trials involving patients with advanced hepatocellular carcinoma (HCC) resistant to sorafenib. Prognostic factors for survival after tumor progression in sorafenib-treated patients are critical for designing second-line trials. Methods To determine the factors affecting the post-progression survival (PPS) after sorafenib treatment, additional analyses were conducted using fixed data obtained from our previous prospective study. Data on patients with advanced HCC treated with sorafenib were analyzed in view of patient characteristics at the time of tumor progression and the progression pattern (intra−/extrahepatic growth or emergence of new intra−/extrahepatic lesions). Results Of the 89 enrolled patients, 70 were diagnosed with disease progression according to the Response Evaluation Criteria in Solid Tumors version 1.1. Multivariate Cox’s regression analysis revealed that Child–Pugh scores of ≥7, macrovascular invasion (MVI), and alpha-fetoprotein of >400 ng/mL were independent predictors of poor PPS. Although both extrahepatic metastasis (EHM) and MVI were characteristics of advanced HCC, EHM was not determined as a prognostic factor. Additionally, the emergence of new extrahepatic lesions also served as an independent indicator of a poor prognosis. The PPS of the patients was well stratified according to the index based on the sum of these prognostic factors, ranging from 0 to 4. Conclusions Child–Pugh score of ≥7, AFP of >400 ng/mL, MVI, and new extrahepatic lesions at the time of progression may be utilized to assess the prognosis and taken into consideration when designing second-line trials. 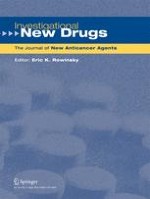 A phase II study of cediranib, an oral VEGF inhibitor, in previously untreated patients with metastatic or recurrent malignant melanoma

An open-label, single-arm, phase 2 study of the Aurora kinase A inhibitor alisertib in patients with advanced urothelial cancer