Lipomas are the most common benign soft tissue tumors and occur in the subcutaneous tissue. Rarely, lipomas present in the deep soft tissue such as intermuscular, intramuscular, and parosteal sites. It tends to be indolent, and symptoms caused by nerve compression are unusual. However, an intramuscular lipoma occurring in the proximal forearm causes paralysis of the posterior interosseous nerve (PIN) because of its anatomical relationship in that area. Below the elbow, the PIN passes beneath the extensor carpi radialis brevis muscle and then continues between the superficial and deep layers of the supinator muscle. The proximal edge of the supinator muscle forms an arch, the arcade of Frohse [ 1]. The PIN is vulnerable in this region [ 2]. We report a new case of an intramuscular lipoma with compression of the PIN.

A 48-year-old woman presented with spontaneous inability to extend the fingers of the left hand. She noticed a gradually increasing inability to extend the fingers over 6 months. She was unable to perform her domestic activities because of weakness and paresis of the hand; she denied any trauma or other diseases. Examination revealed a swelling of 5 × 3 cm in the anterolateral aspect of the left forearm in the region of the brachioradialis muscle just below the elbow. The swelling was firm in consistency, immobile, not fixed to the skin; there were no dilated veins over the swelling or signs of inflammation. The elbow function was normal, as was the flexor strength of the wrist and fingers; however, there was a decrease in the extension strength of the wrist and metacarpophalangeal joints of the fingers and thumb (power 3/5). There was no sensory deficit. Magnetic resonance imaging of the elbow objectified an intramuscular mass, of 8-cm-long axis depending on the supinator muscle, pathognomonic of a lipoma (Figs.  1 and 2). Surgical excision was recommended. General anesthesia was administered, and an incision was made over the mass. The incision of the supinator muscle exposed a fatty encapsulated mass (Fig.  3). The dissection of the mass revealed that it is constricting the PIN (Figs.  4 and 5). The nerves were carefully released, and a lipoma was removed. The PIN was preserved, without damage (Fig.  6). Histological examination of the tumor confirmed it to be a benign lipoma (Figs.  7 and 8). In the early postoperative period, the radial nerve recovered its function. A physiotherapy program was started 2 weeks after surgery. The patient recovered well, and 6 weeks after surgery, she resumed her activities. No local recurrence was detected at 18 months after surgery.
×
×
×
×
×
×
×
×
Anzeige

Symptomatic radial nerve compression is relatively uncommon, and when it is caused by a lipoma, it commonly occurs at the elbow level, compromising the posterior interosseous branch [ 3, 4]. Lipomas are benign tumors composed of mature adipocytes, and they represent one of the most prevalent tumors of mesenchymal origin [ 4– 6]. Lipomas and other tumors over the radial nerve are rare causes of chronic entrapment of the PIN, but they can produce a classic picture of PIN syndrome (PINS). There are some reports of compression neuropathies [ 7– 10] of the upper limb caused by this kind of tumor. Other causes of PIN compression have been described: rheumatoid synovial cysts [ 11], ganglion [ 12– 14], myxoma [ 15], pseudogout [ 16], and chondroma [ 17], among others. Intramuscular lipoma shows an infiltrative nature to the surrounding striated muscle, and the lesion is usually not encapsulated [ 18], although the pathogenesis of an intramuscular lipoma remains obscure [ 18].
The diagnosis of PINS is based on clinical history and physical examination and is confirmed by electrophysiological studies. Classically, this syndrome has neither pain nor other sensory symptoms, but there are cases of forearm pain and paralysis of the extensor muscles of the forearm. If there is any suspicion, based on clinical examination, of a mass as the causative factor of PINS, MRI scan is the imaging method of choice for evaluating their presence and extent. In this clinical case, however, the lipoma was located intramuscularly, and there was a palpable mass on the forearm.
Surgical excision of an intramuscular lipoma is recommended to prevent involvement of the PIN or to ensure optimal recovery when the nerve is already compressed by the tumor [ 19]. The recovery of the neurological deficit relates to the duration of symptoms, the longest reported duration of symptoms with full recovery postoperatively being 18 months [ 20]. The prognosis after excision of a lipoma is excellent, with only one recurrence described in the literature. Malignant transformation has not been reported.
Jürgens and Hampt, in a study of 20 patients with PIN paralysis, concluded that the result of the operation depended on the duration of the symptoms, so that long-lasting paralysis made reinnervation less likely to occur [ 21]. According to the study by De-song et al., early diagnosis and surgery are very important in the treatment of PINS [ 22]. Prompt diagnosis and early removal of the compressing mass facilitate quick neurological recovery.
Anzeige

The prognosis of PINS depends on an early diagnosis, followed by an immediate surgical excision based on MRI findings. The paralysis of the PIN is clinically evident; electrophysiological exploration would confirm the diagnosis and the site of entrapment. After surgical excision of the mass, rehabilitation is needed for rapid functional recovery of the upper extremity.

None
Open AccessThis article is distributed under the terms of the Creative Commons Attribution License which permits any use, distribution, and reproduction in any medium, provided the original author(s) and the source are credited. 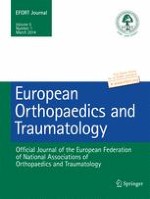 An unusual location of osteolipoma: a case report

Simulating osteoarthritis: the effect of the changing thickness of articular cartilage on the kinematics and pathological bone-to-bone contact in a hip joint with femoroacetabular impingement