To document the effectiveness of a novel technique to decrease tibial slope in patients who underwent a proximal opening-wedge osteotomy with an anteriorly sloped plate placed in a posteromedial position. The hypothesis was that posteromedial placement of an anteriorly sloped osteotomy plate with an adjunctive anterior bone staple on the tibia would decrease, and maintain, the tibial slope correction at a minimum of 6 months following the osteotomy.

Twenty-one patients (14 males and 7 females) were included in the study with a mean age of 36.5 years. Intrarater and interrater reliability of slope measurements were excellent at all time points (ICC ≥ 0.94, ICC ≥ 0.85). The osteotomy resulted in an average tibial slope decrease of 0.8 from preoperative (n.s.). At 6-month postoperative, average slope was not significantly different from time-zero postoperative slope (mean = +0.2°).

The most important finding of this study was that posteromedial placement of an anteriorly angled osteotomy plate augmented with an anterior staple during a biplanar medial opening-wedge proximal tibial osteotomy did not decrease sagittal plane tibial slope. Whether a staple was effective in maintaining tibial slope from time zero to 6 months postoperatively was unable to be assessed due to no significant change in tibial slope from the preoperative postoperative states. The results of this study note that current osteotomy plate designs and surgical techniques are not effective in decreasing sagittal plane tibial slope. 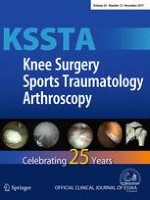 Comparative efficacy of cartilage repair procedures in the knee: a network meta-analysis

Arthrofibrosis after ACL reconstruction is best treated in a step-wise approach with early recognition and intervention: a systematic review

Is tensiomyography a useful assessment tool in sports medicine?