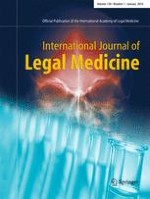 Erratum to: High-resolution mass spectrometric determination of the synthetic cannabinoids MAM-2201, AM-1220, AM-2232, and their metabolites in postmortem plasma and urine by LC/Q-TOFMS

The pharmacology and toxicology of kratom: from traditional herb to drug of abuse

Exclusion probabilities and likelihood ratios with applications to mixtures