To study pain perception in 10–15-year-olds, during and after uncomplicated extractions of bilateral maxillary premolars. The study investigated pain’s natural course and made comparisons between the first and second extractions.

31 Swedish children in need of orthodontic treatment were identified and consecutively enrolled. Tooth extractions followed a standardised protocol and the two teeth were extracted with at least 10 days between. The participants rated pain intensity using visual analogue scale (VAS) at 14 different time points from treatment and 7 days forward.

The majority of the participants who undergo uncomplicated bilateral extraction of maxillary premolars experience mild to moderate levels of postoperative pain during a short period of time, with no differences between the first and second extractions. Bilateral tooth extractions is a suitable model for further studies on pain management. 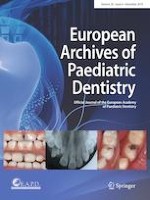 A comparison of decontamination methods of tried-in preformed metal crowns: an in-vivo study

Letter to “Evaluation of the efficiency of fluoride-releasing adhesives for preventing secondary caries in vitro: a systematic review and meta-analysis”

The Letter to the Editor regarding the paper ‘Evaluation of the efficiency of fluoride-releasing adhesives for preventing secondary caries in-vitro: a systematic review and meta-analysis’

Do expectant mothers know how early childhood caries can be prevented? A cross-sectional study