Whey protein was shown to reduce blood glucose responses in humans and various other positive effects have been attributed to this protein. In contrast, studies using glycomacropeptide (GMP) as part of the whey fraction of bovine milk are rare. We, therefore, studied the postprandial responses to GMP administration in humans with impaired glucose tolerance compared to the effects of pure whey protein in a random design.

Fifteen prediabetic volunteers received on different occasions one of three test drinks containing 50 g of maltodextrin19 (MD19) alone or in combination with either 50 g GMP or 50 g whey protein isolate (WPI). Blood was collected over 4 h with analysis of blood glucose and hormones, gastric emptying rate as well as plasma amino- and fatty acids, β-hydroxybutyrate and acylcarnitines.

The WPI drink reduced the AUC of venous blood glucose compared to the MD19 drink in the prediabetic group by 11% (p = 0.0018) whereas GMP reduced the AUC by 18% (p < 0.0001), significantly different to the WPI drink (p = 0.0384). The reduction in blood glucose after the GMP drink was accompanied by a significantly lower AUC of insulin (− 34%) than for the WPI drink. Levels of C-peptide and of glucose insulinotropic polypeptide (GIP) were highly increased after the WPI drink over the MD19 control drink but remained in essence unaffected by the GMP. 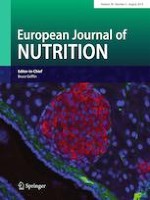 Food patterns in relation to weight change and incidence of type 2 diabetes, coronary events and stroke in the Malmö Diet and Cancer cohort

Non-alcoholic fatty liver disease and obesity: the role of the gut bacteria