Supratentorial structures are known to be involved in the neural control of swallowing, thus the potential for volitional manipulation of pharyngeal swallowing is of rehabilitative interest. The extent of volitional control of the upper oesophageal sphincter (UOS) during swallowing remains unclear. Prior research has shown that the UOS opening duration can be volitionally prolonged during execution of the Mendelsohn manoeuvre, which does not change the UOS opening time in isolation but the swallowing response in its entirety. This study explored the capacity of healthy adults to increase the period of pressure drop in the region of the UOS (UOS-Pdrop) during swallowing, through volitional UOS pressure modulation in the absence of altered pharyngeal pressure. The period of UOS-Pdrop was used as a proxy of UOS opening duration that is associated with a pressure decrease at the region of the UOS. Six healthy adults were seen 45 min daily for 2 weeks and for one follow-up session. During training, high-resolution manometry contour plots were provided for visual biofeedback. Participants were asked to maximally prolong the blue period on the monitor (period of UOS-Pdrop) without altering swallowing biomechanics. Performance was assessed prior to training start and following training. There was evidence within the first session for task-specific volitional prolongation of the period of UOS-Pdrop during swallowing with biofeedback; however, performance was not enhanced with further training. This may suggest that the amount to which the period of UOS-Pdrop may be prolonged is restricted in healthy individuals. The findings of this study indicate a potential of healthy adults to volitionally prolong UOS opening duration as measured by the period of pressure drop at the region of the UOS. Further research is indicated to evaluate purposeful pressure modulation intra-swallow in patient populations with UOS dysfunction to clarify if the specificity of behavioural treatment may be increased.
Anzeige 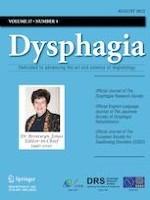 Swallowing Exercise During Head and Neck Cancer Treatment: Results of a Randomized Trial

Development of a Remote Examination of Deglutition Based on Consensus Surveys of Clinicians (Part I): Selection of Examination Items

Per-oral Endoscopic Myotomy with Division of Septum (D-POEM) in Epiphrenic Esophageal Diverticula: Outcomes at a Median Follow-Up of Two Years