The increasing prevalence of type 2 diabetes mellitus (T2DM) calls for evolving a concomitant screening strategies for early disease detection and prediction of the complications. Progranulin (PRGN) was recently introduced as a biomarker of inflammation in T2DM. However, little data have been published as regarding progranulin in relation to diabetic micro angiopathy among Egyptian patients with T2DM. The aim of this study was therefore to investigate and evaluate serum progranulin as a biomarker for the presence and severity of micro vascular complications among Egyptian patients with T2DM.

A total of 90 age and sex matched participants were included in this cross sectional study. They were divided into group 1 included 30 non diabetic healthy controls and group 2 included 60 patients with type 2 diabetes mellitus. Furthermore, diabetic patients were categorized into two subgroups depending on the presence or absence of microvascular complications. Evaluation for diabetic nephropathy, neuropathy and retinopathy were determined. Furthermore, laboratory investigations were performed and serum progranulin levels were measured by a quantitative sandwich enzyme linked immune sorbent assay.

Progranulin might be considered as a biomarker for diabetic micro angiopathy and its severity. In addition, there is a group of diabetic patients with decreased eGFR but without albuminuria in which serum PRGN level was indicated to be used as an early biomarker of diabetic nephropathy. 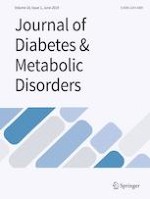 Periodontitis and diabetes interrelationships in rats: biochemical and histopathological variables

The use of conversation maps in the metabolic control of diabetes in Brazilians: a randomized clinical trial